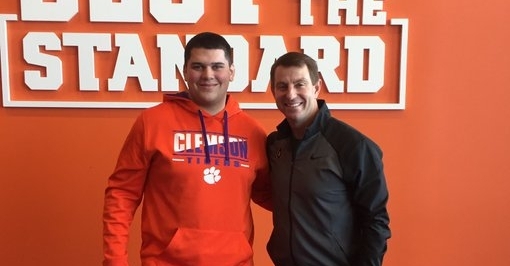 The South Carolina Offensive Lineman of the Year is a Clemson Tiger.

Will Boggs is a 2020 lineman out of York (SC) who had a stellar season. Boggs made the Shrine Bowl and was voted Region Offensive Lineman of the Year. He graded out at 88 percent and added 41 knockdowns and one sack in the 2019 season.

Boggs visited the Clemson campus this past weekend and accepted a preferred walk-on spot from the Tigers. The commitment capped off a busy weekend.

Sunday was the day the Tigers made the offer.

“And then Sunday we got to go into position meetings and got to have a photoshoot,” Boggs said. “That was a lot of fun all around. Coach (Robbie) Caldwell, when we were in our position meeting, he was addressing the group and it really hit home with me they didn’t care if you were 0-star, 1-star or a 5-star that we were all treated the same. What mattered is what kind of character you had and how hard you worked.

“Coach Swinney and I had been talking a little bit on Sunday. He was just talking to me about how he would love for me to be at Clemson. They knew I had a few other offers and could go to some other places, but really at the end of the day, Clemson was the best fit for me. I dreamed of being able to run down the Hill and play for Coach Caldwell pretty much my entire life. It really is a dream come true to do this.”

Playing for Caldwell was a big draw for Boggs.

“Coach Caldwell is just awesome. He’s funny, and I just like him a lot. I know he will love me like I am his own, and he told us that,” Boggs said. “He told us that he would love us as about as much as our parents if not even more. I believe him. He’s got a lot to teach me and our offensive line, but he is a great coach and a great man for us.”

Swinney’s reaction to the commitment had Boggs ready to cry.

Boggs had offers from Presbyterian, Newberry, and Davidson but also played other sports, including wrestling and track (shot, disc, and throws javelin).

He is also a whiz in the classroom.

“I will have two diplomas - I will get a diploma from York High School, and I am also enrolled in the SC Governor’s School for Science and Mathematics,” Boggs said. “It’s through a program called the Accelerate Program and instead of having to go to the Governors’ School they offer online college level courses. I will enter Clemson as a second-semester sophomore.”

Boggs had a memorable experience as a member of the South Carolina Shrine Bowl team.

“It was amazing. It really hard to describe how awesome that experience was especially that Thursday when we went to the Shriners Hospital,” he said. “That was one of the best things ever, seeing all those kids and being to hang out with them. We played some games with them. It was a lot of fun.”

The highlight of his senior season was winning the award for being the best offensive lineman in the state.

“I was really kind of surprised with that,” Boggs said. “I was extremely happy. It is hard to put in words how happy I am about that and all the support I have had from my family, Coach Boyd and all my friends."