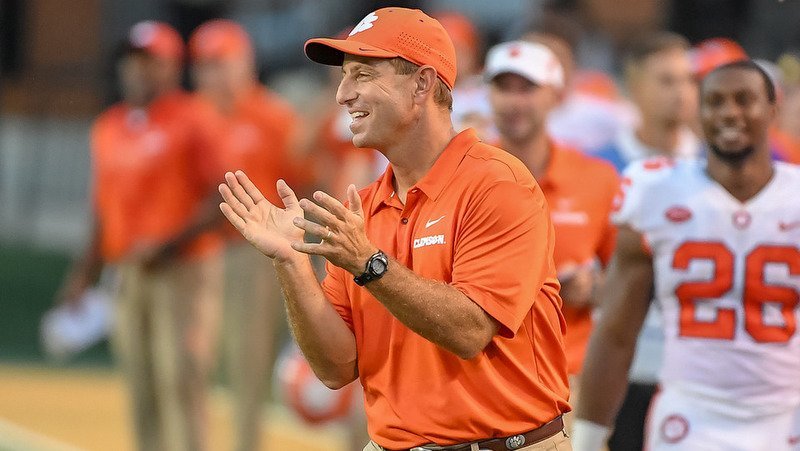 Swinney says Clemson's best football has yet to be played

CLEMSON – The 2018 football season is half over, but the Clemson Tigers haven’t come close to reaching their potential.

Despite the fact that Clemson is coming off of a 63-3 dismantling of Wake Forest, head coach Dabo Swinney says the Tigers’ best football has yet to be played.

“Our best football isn’t behind us, that’s for sure. We’ve been a work in progress this first half,” Swinney said during a Monday evening teleconference. “I think we are on the right track. I think we are getting better, but we’re a long way from playing our best game. We’ve got too many things that we’ve got to do better, details to clean up – technique, footwork, football awareness… Just a lot of things. But the guys are playing hard. They want to be coached.

“So, the good news is we’re 6-0, and the better news is we haven’t come close to playing our best game. Not even close. We’ve got a lot of room for improvement, and we’re not a finished product or anything like that. So, hopefully, we’re a team that continues to get better. You want to be good enough to win in the beginning. They all matter. You want to get off to a good start, but not many teams play their best football early… So, we’re just continuing to try to handle our business and hopefully, in the end, we’ll be a good team.”

Clemson has an off week before N.C. State on October 20, but Swinney said he wants his team’s full attention this week before giving them the weekend off.

“We’re going to serve our community here, and that will be a lot of fun. But just the mental part of what we’ve got to do to get ourselves ready… We can’t check out. I know they’re excited about having a little time this weekend, but we’ve got a lot of work to do before Friday gets here. So, just making sure that we’ve got the right mindset. I thought they came in here today with that, and again, we’ll get out on the field here in just a little bit.”

Swinney said the team turned the page to N.C. State – who also has an off week – Monday night.

“So, just huge week coming up, starting tonight (Monday). We’re getting ready to head out on the practice field here shortly and try to get a good week of work done on Clemson and also on NC State,” he said. “They have an open date as well, so how we manage that time is critical. But again, we’re proud of our guys, proud of where we are, and if we can continue to improve in some critical areas, I think that we have a chance to be a really good team. But right now all we can do is be 6-0, and that’s what we are, and excited about an undefeated matchup here two weeks from now in the Valley.”

Players of the game for Wake Forest

“On defense, it was Tre Lamar and Tanner Muse. I thought they just played outstanding. And on offense, it was our entire offensive line. We rushed the ball for 471 yards. I haven’t been a part of many of those. But just really a great job by those guys up front. And, then, special teams was A.J. Terrell. I thought he was relentless on punt coverage. That returner was really good, leading this league, and we held him to 3.8 yards a return. So, he was definitely a big part of the game as well.”

On the health of the team

“Health-wise we’re in good shape. I think our team’s in a good spot, and certainly coming off an open date, hopefully, that will help us even more.”

“It was good to not have to come in here yesterday, and everybody gets a chance to take a little bit of a breather anyway. We did have C.J. (Fuller)’s funeral. It was a beautiful service and emotional day for a lot of people, but definitely a beautiful service.

“But to reiterate what I said the other night, just a special game. Lot of fun. Definitely our most complete game as far as putting it all together — running, passing, sacking the quarterback, controlling the line of scrimmage, creating another turnover… Just so many good things in the game. We got the chance to play all the guys, and it was a fun game in that we got a chance to see a lot of guys play and play well. We had an opportunity to coach those guys. But I think our mission was completed. We wanted to create some confidence and momentum going into this open date and feel good about finishing the first half of the season. I think we’ve done that. There are lots of positives for sure.

“Offensively, right at 700 yards, and what we did rushing and 25-of-30 passing, no interceptions… Really solid in the red zone, and our explosiveness continues to be a positive for us. Six touchdowns of 50 yards or more, and just really a lot of good things to build on there.

“And defensively, we just absolutely controlled the line of scrimmage. We handled their tempo. We lined up well. We pressured the quarterback, played in their backfield all night. We played good red-zone defense. This was the second offense in this league coming in – they rushed the ball well on Notre Dame and put up 20-something points on Notre Dame. Really just pleased with our guys. I thought we tackled well. We dominated third down. They were only 7-of-27 passing. Just a lot of good stuff.

“So, really pleased. Did some good things in special teams as well. But you come off a game like that, and it’s easy to feel good about it. But we turned the tape on – golly, we’ve still got so many errors and things that we can improve on for sure. We did have a turnover, and we’ve got some fundamental, technique things that we’ve got to get better at, at all positions on both sides of the ball. So, I just like where we are. I like the mindset that our team has. There’s a lot of urgency within our coaching staff to try to improve on a lot of these details because that’s what we’re going to have to have. We’ve got to be coachable and relentless to improve.