Pollard has had a solid first few weeks of fall camp

The quiet and lazy days of summer are over, and things are about to get busy.

The Clemson football team started fall practice with most of the campus empty, but the students arrive this week, thousands of fans will descend on Death Valley next Sunday for fan day and even more people will arrive to witness next Monday’s eclipse.

The Tigers will hold a situational scrimmage Wednesday, a full scrimmage next Saturday, and after that, the team will begin preparations for the season opener.

However, before we get too far into a busy week, we wanted to pass along further team-related nuggets and intel we’ve received. We will start with this week’s media schedule.

The team will practice today, but there will be no media availability. The Tigers will practice late Tuesday, and we will have availability with the coaches and players later in the evening. Wednesday and Thursday are early practices, and the reports should start rolling in around lunchtime. Friday is an off day for the media, and we will once again cover the end of Saturday’s scrimmage.

As far as what we’ve heard:

*A lot of people fully expected that Kelly Bryant would have moved to another position by now, and if that’s what they were hoping he has gladly disappointed them. I’ve talked to several people who have been at practice, and they all say that Bryant has simply been better than the other guys. That isn’t coach-speak, it’s what observers are telling us.

I had two different people who watched Saturday's scrimmage (Dabo doesn’t allow the media to see scrimmages) say that Bryant is far different than the quarterback they saw in the spring. He’s more confident, understands what the coaches want, and has shown that he’s capable of running the show.

Pollard has had a solid first few weeks of fall camp "

It doesn’t mean he will be the starter later in the season, but right now all signs are pointing to Bryant starting against Kent St.

And for those that might look at this situation and question the coaches and bring up Cole Stoudt and Deshaun Watson, don’t. Not even close to being similar.

*There is another offensive name we keep hearing – wide receiver Diondre Overton. A lot of people have wondered who would step in and be the tall, jump-ball receiver that would replace Mike Williams. Many thought that Tee Higgins would be the guy this season, and while Higgins has been impressive for a freshman, Overton has drawn rave reviews from observers and the coaches.

He could be a major weapon this season.

*The battle at right tackle between Sean Pollard and Tremayne Anchrum is ongoing, but I have to wonder if the decision hasn’t already been made for the coaches. Pollard stepped in and did an admirable job replacing Jake Frurhmorgen last season, and I’ve been hearing he has had a strong fall camp. However, Anchrum has also played a lot of left tackle, and his ability to play multiple positions might give him value as a backup who can come in and play either side of the line.

*It appears that all things are even in the battle at running back through the first few weeks of camp. It’s going to be interesting to see which player uses this final two weeks to claim the majority of the playing time.

*I have to take a second to respond to some board posts I’ve seen the last few days. It gets to be this time of year, and people want to know every little tidbit about their favorite team. That’s understandable, and I get it. I’m the same way. But people will read or listen to the post-scrimmage quotes from the coaches, and go into some kind of meltdown mode because a certain player (or players) weren’t mentioned. Because Dabo or Tony Elliott or some other coach didn’t mention Hunter Renfrow, that means it’s time to become concerned.

Of course, if you’re somewhat sane, you understand that isn’t the case. I have often laughed with other media members, saying that if you write a story about a particular position group (say the offensive line), you had better mention every player on the roster today and mention others going back to 1912. If you don’t mention every single player, someone gets the idea that something is wrong with said player. 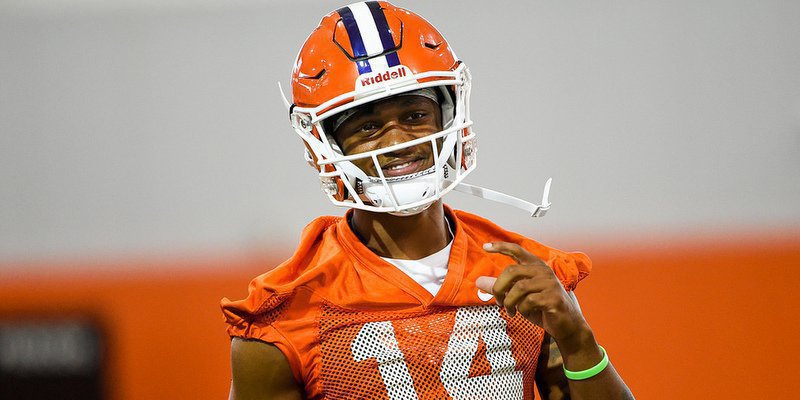 Overton is proving he can be a weapon this season

The post-scrimmage stuff doesn’t work that way – the coaches have literally just walked off the field, haven’t watched a second of film, and have cameras thrust in their faces. And we have anywhere from five to ten minutes, and it simply isn’t possible to sit there and read the roster and get their opinion on every player in the program.

*This is just my opinion after watching the first few weeks, but I think tight end Milan Richard is going to be a star.

*Defensively, the freshman I hear the most about is corner A.J. Terrell. I will be anxious to see where he winds up on the first depth chart that is released.

*The best text I got after the scrimmage Saturday was from a former offensive player, who told me that it was hard to get a read on the quarterbacks or the running backs because the starting defensive line is just dominant. We already knew that, but it looks like Clelin Ferrell has taken his game to that next level. This season is going to be so much fun to watch, at least for me. Yes, I love offense and long touchdown runs and passes, but I love watching a dominant defense.