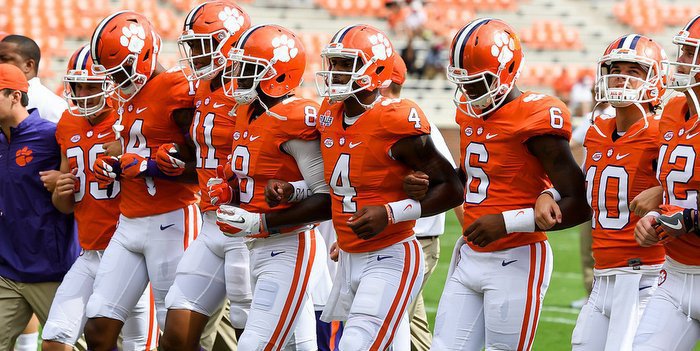 Even the official knows McCloud is pointed in the right direction

Like head coach Dabo Swinney, I’m glad the preseason is over, and the real fun can begin.

Sure, the Tigers opened the season with a much-anticipated matchup at Auburn, but the news out of Clemson the last few weeks has been dominated by questions about the team, players taking a knee during the national anthem and national pundits and Clemson professors trying to work up some false sense of anger at Swinney for stating his opinion.

Can we just get back to football? Especially since the regular season is a quarter over and will be a third over after Thursday’s game at Georgia Tech. This goes by too quickly to spend time and passion arguing about outside factors.

We’ll start with Saturday’s win over South Carolina State. I asked Swinney during Sunday night’s teleconference if the Bulldogs played the perfect guests in their 59-0 loss. Clemson rested the majority of its starters – Christian Wilkins played just 12 plays, and Wayne Gallman carried the ball just seven times – and he said yes. The Tigers were able to get a rhythm going offensively, gain some confidence and put up some points while playing a bevy of younger players.

In other words, it couldn’t have worked out better for Clemson because the Tigers travel to Atlanta to take on Georgia Tech in Bobby Dodd Stadium Thursday night. In case you haven’t heard, Clemson hasn’t won there since 2003. Clemson wore purple jerseys and white pants in that September contest as the Tigers racked up 436 yards of total offense. 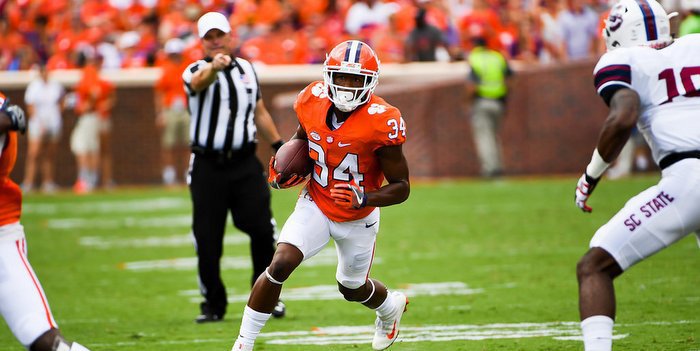 Even the official knows McCloud is pointed in the right direction "

Quarterback Charlie Whitehurst completed just 13-of-38 passes but threw for 298 yards and three touchdowns as the Tigers went on to win 39-3. Clemson’s current co-offensive coordinator – Tony Elliott – caught a touchdown pass in that game. Elliott caught a nine-yard pass from Whitehurst early in the second quarter that gave Clemson a 10-0 lead. He ended up with five catches for 31 yards.

This is a game that Clemson fans might have marked as an easy win back in August, and the Jackets struggled with Boston College in the season opener in Ireland but found a way to win. Now they’re 3-0, and the offense appears to be clicking (they scored 38 on Vanderbilt Saturday. I know, it’s Vanderbilt, but…), and we know that strange things happen at night in Bobby Dodd. Ask Thomas Austin and Ron Cherry.

You can bet the Jackets have Clemson’s full attention and won’t be looking ahead to the showdown with Louisville on Oct. 1. There are already rumors circulating of College GameDay making an appearance – I wouldn’t be surprised – but none of that is going to happen if the Tigers slip up in Atlanta Thursday.

This week will challenge Swinney’s one game at a time mantra, but the next 12 days or so will be the most fun we’ve had since the Tigers’ run in the College Football Playoff last season. Sure, the opener at Auburn was fun but the stakes are increased when it comes to conference play, and with the hungry Jackets waiting in the house of horrors Thursday and Louisville licking its chops on the horizon, it’s going to be a fun couple of weeks.

And speaking of fun, I’ll finish with some thoughts on the youngsters we saw Saturday.

Running back Tavien Feaster is going to be a force, and it might be sooner rather than later. We haven’t heard how he’s doing in pass protection – a must-have skill for running backs in Clemson’s system – but his blend of size and speed and the flashes he showed Saturday are a harbinger of things to come. More than one person in the press box Saturday commented that while the Tigers’ experienced stable of backs is nice to have for depth, none of the ones sitting behind Gallman possess what Feaster brings to the table.

And that brings me to Ray-Ray McCloud. I wondered how he would respond after his punt return gaffe against Troy, but he stood in the hallway after the game and owned up to his mistake and vowed to make up for it the rest of the season. It’s never a good thing when a valuable piece of the offense goes down, but the injury to Hunter Renfrow opened up even more playing time for McCloud, and he’s responded the last two weeks. Budding superstar? Will be fun to watch McCloud continue to grow.

Bring on Tech and Louisville and football talk. The preseason is over, and the real fun can begin.