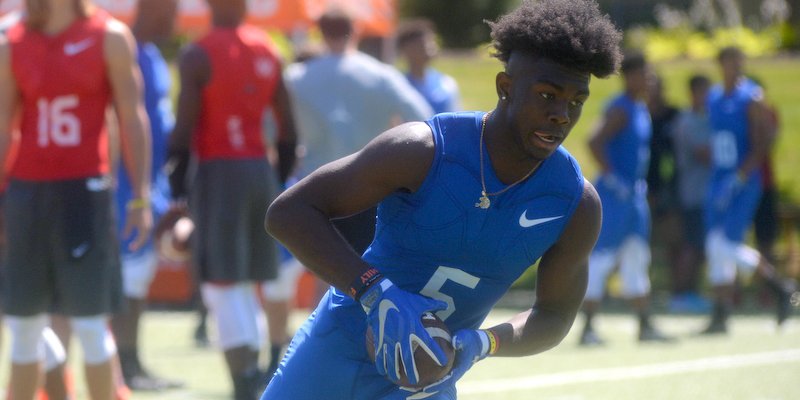 Trevor Lawrence during the morning session

BEAVERTON, OR – Greetings from Nike World Headquarters in beautiful Beaverton. We’ve had a busy morning at Nike’s The Opening, so we’ll jump right in with our sights and sounds from the opening part of the competition.

There are 166 of the nation’s best prospect in town for the six-day competition, taking place at Nike’s World Headquarters from June 28-July 3rd.

Known as one of the premier events in high school football, Nike Football The Opening Finals attracts the best of the best and is designed to help athletes improve their knowledge of the sport, learn position-specific training techniques, and ultimately crown a winner for the Nike 7ON tournament (7v7) and the Nike Final 5 Linemen Competition.

Thursday morning featured quarterbacks, wide receivers and tight ends, and that meant we got to watch Clemson quarterback commit Trevor Lawrence in action. There really isn’t a lot we can tell you that you haven’t already heard or seen for yourself, but the media and coaches that gathered on Bo Jackson Field all had the same reaction when watching Lawrence throw – the ball just sounds different when it hits a receivers hands.

With that in mind, I wanted to watch and see how he handled the shorter and intermediate throws – sometimes you can have a great arm but no touch on the shorter passes – but Lawrence made all the throws with ease. He has touch when he needs it and he uses that big arm when he needs it. 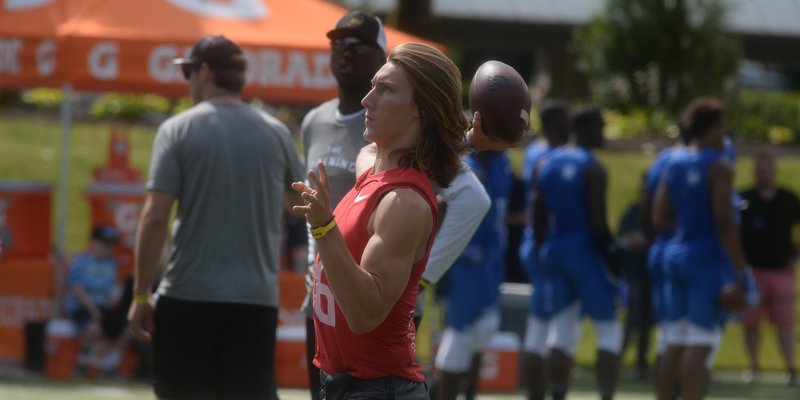 Trevor Lawrence during the morning session "

I asked Lawrence why competitions like this are important to him, and he said it’s one of those rare times when the competition is even across the board.

“I love throwing to all of these guys. Every receiver that comes up there is really good,” Lawrence said. “The competition here is really stiff so it’s a lot of fun. I feel pretty good, and I feel like I did most of the things pretty well. I felt good today.”

*Wide receiver Justyn Ross was the one player I spent most of the time watching. He recently released a top five that has Clemson, and it’s no surprise why he’s one of Jeff Scott’s top targets. Ross is actually taller than I thought, and he eats up ground in a hurry.

Ross made several one-handed grabs, and he showed his competitive nature during the rare timeouts by asking quarterbacks to throw his way so he could continue to make acrobatic catches.

We spoke with Ross after the morning session (in an interview we will run later) and he said his recent trip to Clemson showed him and his mother all he needs to see. At this point, he wants to sit back and think about all of the schools and find the best fit.

He visited campus with his mother a few weeks ago, and he said she was impressed with Clemson’s academic side. He has tentative plans to attend the All In Cookout on July 21st, but his high school team has a 7-on-7 the next day so he’s not sure if he can do both. 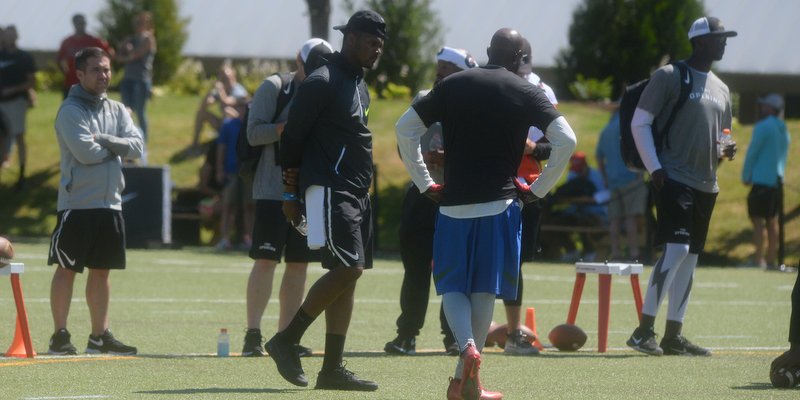 Clemson looks to be in great shape here.

*Wide receiver Jordyn Adams is everything we already knew – a smooth route runner with great hands. He has quick feet and he got in and out of his breaks quicker than most of the receivers there. Adams is supposed to name his college choice while he’s here, and Nikki asked him about Clemson and North Carolina (his final two schools) and he had a surprising answer – he said North Carolina has more of a family atmosphere than Clemson. You don’t hear that often and it might give a glimpse into his choice.

*Our final prospect was wide receiver Brennan Eagles. He declined interviews after the session, but I did get enough information to tell you he’s building a relationship with receivers coach Jeff Scott and plans to come back to Clemson’s campus for a game this season.

Eagles reminds me – especially in the way he runs and jumps – of former Clemson receiver Mike Williams. He already has the size, and his legs are long and cover ground in a hurry. I can also tell you after watching him that he is a natural leader, the kind of kid that the others gravitate towards.

*We will have more from Oregon in a bit, but I did want to pass along that we saw former Clemson quarterback Deshaun Watson during the session. He spent a good bit of time talking to NFL Hall of Fame receiver Jerry Rice.