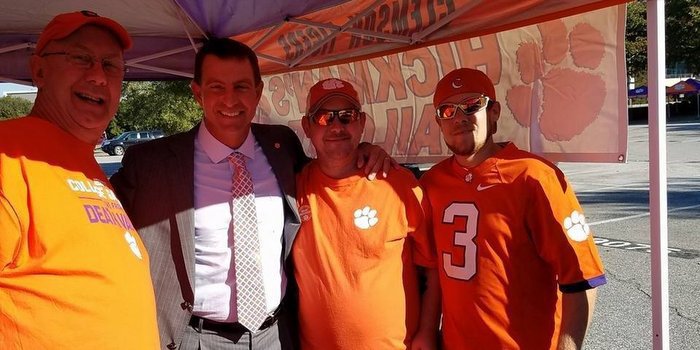 CLEMSON - Clemson head coach Dabo Swinney surprised more than one person last Saturday when he made a surprise visit to several fans’ tailgates.

Clemson and Louisville didn’t kick off until almost 8:30, but Swinney had to be on campus for an interview he did live on ESPN’s College GameDay. Clemson fans were out in force in the early hours of Saturday morning, and Swinney knew it was going to be a special day.

“I’ve been a part of some great ones, but that was incredible. It really was. From when we got off the bus to Tiger Walk it was just incredible,” Swinney said Tuesday. “I mean it really was. You could just feel in the intensity in the crowd. That was the highest ranked win we ever had here. It was a big game. A big dog gone game. The emotion that was in the crowd and the energy was powerful. I don't know if we have ever had back to back penalties on the first two plays of the game and that was a direct result of our crowd. No question about it. Then in the fourth quarter. We kind of put them asleep a little bit with how we played in that third quarter. That kick return got them back up and it was on from there. Man, it was a special, special environment to be a part of.”

However, it was when he left his interview session with ESPN that he decided even a head coach deserves a little Clemson tailgating time.

“Coming over to the GameDay. I think that show comes on at nine, and they wanted me here about 9:15. I got over there right at nine,” Swinney said. “They were just coming on the air or a little before. I mean the place was packed and they were people all over the campus. When we left GameDay, me and the trooper were heading back to Anderson back to the hotel, coming down Perimeter (Road). I said 'Man pull over here'. We just stopped at a couple of random tailgates. We pulled up on this one group over in the parking lot. They had a big ole orange van. These ole boys were sitting out and had their chairs kicked back. Doors were open. They had a big screen TV.

“They were just sitting there. It's like 9:45 or 10:00 in the morning. The trooper car pulls up and of course they were all like what is going on. They are all drinking beer. I rolled the window down and I'm like, 'hey boys are we ready to go?". They looked at me like 'Coach Swinney?'. So I get out of the car and I said 'Hey men. I just wanted to make sure we are ready around here and I said y'all drinking beer already. It's going to be rocking the Valley tonight. We had fun with that so I went around to a couple other tailgates, just kind of pop in on some people in the parking lot and took some pictures. Then we headed back out.”

They didn’t make it far when Swinney noticed another couple that he felt needed a visit.

“Now we are going back out down Perimeter Rd. Now we have come out a good ways and I look up on my left and underneath a tree, I think before you get to Cherry Road. There was a truck that was pulled on the grass,” Swinney said. “He's backed all the way up under a tree. They got it all set up. There is some food cooking and they got all this stuff. It's just a man and a woman. There are in two of those zero-gravity chairs. You know what I am talking about. You just kind of lay back and they will lay all the way back. They are laid back. She has got a pillow, got a cover.

“I said 'Hang on. Stop here.' I come running up on them. I'm like 'Can I get y'all anything? Y'all need anything?' Now this is the ultimate setup right here. So I laid in the zero-gravity chair and hung out with them for a minute and then I went on back to the hotel. I told them the team when I got back because we had our first meeting at 11:15. I told them guys it is unbelievable. No telling how early those people were there setting up and all that stuff. It was amazing just to be a part of it. That's what makes Clemson special is just the atmosphere. I don't know how many people were here that weren't in the stadium. There might have been 15 thousand-plus that were just here tailgating. That didn't even come to into the game, just out having a big ole time. So it's unique and special place for sure.”