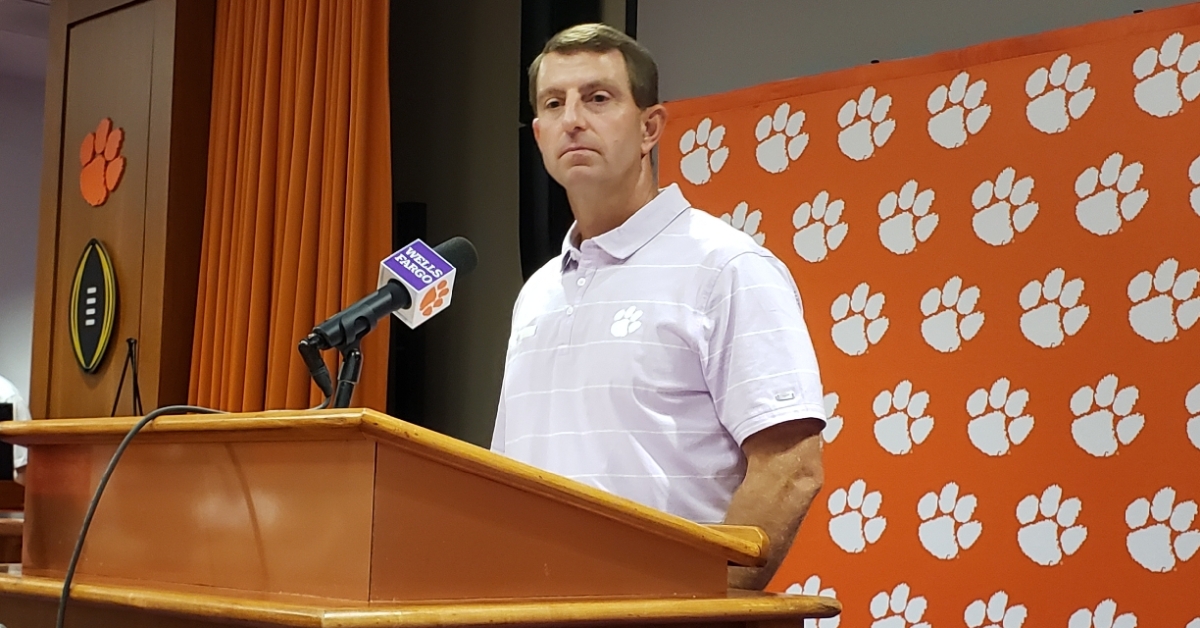 CLEMSON – Control of the ACC Atlantic is at stake when Clemson visits Louisville this weekend.

Louisville is coming off a 62-59 win at Wake Forest, the second-straight conference win for the Cardinals, and Clemson head coach Dabo Swinney said Louisville is playing with a lot of confidence.

“Excited about getting ready for Louisville this week. Proud of our guys for how they competed against Florida State,” Swinney said during his weekly press conference. “That was a tremendous performance on both sides and a very clean game and something we can build on, which is what our goal is this week. It's to build on the improvement and the momentum. Getting back into division play and going to a team on the road. They've won four out the last five games so it's a team that's got a lot of confidence. They just went on the road, beat an undefeated Wake Forest at their place. A team that is playing really well and a team that you can see improvement.”

“Cannot say enough about the job that Scott Satterfield and his staff have done. It's incredibly obvious to watch the difference in where they are right now and what I saw last year in getting ready for Louisville,” he said. “It's polar opposite and there's a lot of the same guys. They've got them playing with incredible belief. Their effort is tremendous. They have an excellent scheme on both sides and it's a different deal. They've rushed for over 200 yards on everybody they've played except Florida State, including Notre Dame.

“I think they're one of the best in the country at plays of 10 yards or more. They've been explosive. Everything they do offensively is built through running the football, a lot of option principles. I really like their scheme. They're primarily a pistol team but lots of option principles built into it and a lot of play action off of it. This is a team that knows what they're doing on offense.”

The Cardinals are ranked 16th nationally in total offense.

“Their quarterback is outstanding and actually they're playing both guys. No. 3 (Micale Cunningham) got banged up and No. 6 (Evan Conley) comes in and leads them to victory against Wake Forest,” Swinney said. “Both of them are very accurate passers. It wouldn't surprise me to see both of them. That No. 3 is Houdini. He just escapes. He's constantly avoiding stuff. You think you've got him and he alludes and extends, runs for first downs and next thing you know he's made some really great throw. He's a very accurate passer so just really impressed with what they're doing. They're good up front.

“Probably the biggest left tackle (Mekhi Becton) that we're ever going to see. He's massive. He's probably 6-8 and they list him at 370 but he's probably 400. He's huge and really playing well for them. Their whole offensive line is playing well. No. 10 (Javian Hawkins) - that back - is a really good player. He's made some huge plays for them, big runs. He's caught the ball for them. Their tight end is playing really good. All three of the receivers - No. 5 (Seth Dawkins), 7 (Dez Firzpatrick) and 1 (Chatarius Atwell). I think No. 7 averages 19 yards a catch. No. 5 is averaging 21 yards a catch so they've been incredibly explosive and that's all built through the run game. That's just what they do. They're going to run the ball. They stay patient.”

He also likes what Louisville has done on defense.

“Schematically, they really challenge you. How hard they're playing and then their effort and they've got some skill who can make plays,” Swinney said. “Very impressed with what they've been able to do, especially on that side of the ball. On the defensive side, they did not start off well but they're really getting better. Watching the tape from last year compared to this year, it's night and day. Guys are playing with great effort. They're playing with good technique. They're not misaligning. They're where they're supposed to be. As a coach, that's what you're looking for. You can see they're playing with physicality. They're rallying to the ball and they're trying to get after the quarterback. Just a really good team.”

Louisville had 230 kick return yards versus Wake and added a 50-yard punt return.

“The thing with this team that has probably been the biggest equalizer is what they've done in the returns. They've got some really dangerous returners that can change the game,” Swinney said. “We've got a three-phase challenge that we've got to be ready to accept up there at Louisville. I'm excited about it.”

Louisville is 2-1 in the ACC and a win over Clemson Saturday would allow the Cardinals to control their own destiny.

“Control of the division is on the line. They beat us, they control their destiny since we beat Florida State because that was their one loss in the league. 4-2 team, lost to Notre Dame and at Florida State, in a game, they could've won,” Swinney said. “With them beating Wake Forest, they're in control if they can find a way to beat us. Same thing for us. We don't want to be at the mercy of somebody losing. We want to be able to say in control of what we're trying to do, which is win the division. This is division playoff football and it's the best of one, simple as that. We're not a best of four. It's a best of one and that's the mindset that I want our guys to have.

“Then, just go play well and play well on the road. We've played one really good game on the road and one we didn't play very well so let's create that consistency and what it's going to take to have the type of season we want to have because you have to play well on the road if you're going to have a great year. Really impressed with this team and the job that Scott has done. We're excited about going up to Louisville and hopefully playing our best game of the year.”