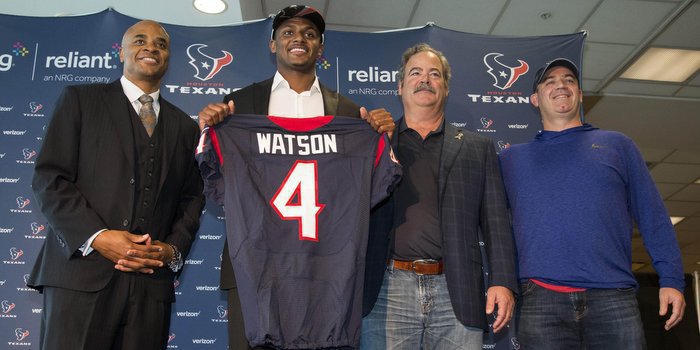 Clemson fans spent more than two years filled with angst, hoping against hope that quarterback Deshaun Watson didn’t wind up with a downtrodden franchise like the Cleveland Browns. Once the smoke from the NFL Draft cleared, it was evident that Watson couldn’t have hand-picked a better franchise to play for than the Houston Texans.

Watson put together a stellar career at Clemson. He threw for 10,163 yards and 90 touchdowns as a Tiger, setting a school record in career completion percentage (.674), passing efficiency (157.5) and total offense per game (318.3).

It took a while for many of the draft analysts to catch on to what Clemson fans, coaches and many of the coaches in college football already knew – Watson would be chosen by somebody early in the draft to lead their franchise. The biggest question was who.

Last Thursday night, the Texans surprised everyone when they traded up to No. 12 to select Watson. Texans head coach Bill O’Brien and general manager Rick Smith met with Watson during pre-draft meetings and came away convinced he was the man for the job.

“He’s a winner, 33-5 as a college quarterback, national champion,” O’Brien said after the draft. “When I met him at the Combine, very poised guy. I felt that he was a guy that answered the questions very honestly, had a good memory, good recall of specific plays that happened during his college career."

Watson is a two-time Heisman Trophy finalist and led Clemson to 28 wins over his final two seasons. With a 32-3 record as the starter, Watson compiled the best winning percentage in school history for a quarterback. His final game in a Clemson uniform came in a dramatic 35-31 win in the national championship game against Alabama, giving Clemson its first National Championship since 1981.

His final pass play was a touchdown toss to Hunter Renfrow with one second left on the game, capping a frantic fourth quarter in which he made some of the best throws of his career.

“One thing that stood out to me was how he played in clutch moments, in big games, games that really meant everything, national championship games, big ACC games, the guy came through,” O’Brien said. “When the chips were down, he was able to lead his team to victory, and I think that says a lot about a quarterback in the end. One of the things we look at.”

Watson and the Texans begin rookie camp in mid-May. Training camp at The Greenbrier in West Virginia begins at the end of July, and Watson will compete with Tom Savage for the starting job. The Texans signed Brock Osweiler before the start of last season, but Osweiler’s first and only season in Houston was a disaster, and the Texans traded him to the Browns and made the moves necessary to pick up Watson.

So why are the Texans a perfect fit for Watson? His top wide receiver with his new team is former Tiger DeAndre Hopkins, who has emerged as one of the best wide receivers in the NFL. In Hopkins, Watson has a wide receiver similar to what he had in Mike Williams, who went to San Diego in the first round of the draft.

The Texans are also a franchise that is used to winning – Houston has been above .500 in five of the last six years and made the playoffs four times in that stretch.

They also have a great defense - last year’s team went 9-7 because it had a top-five defense that allowed 5.1 yards per play. The offense was 28th in scoring and 31st in yards per play (4.7). The Texans need a quarterback that will come in, make the right reads and right throws and not lose games.

He also doesn’t have to be the face of the franchise right away – the Texans have plenty of star power in J.J. Watt, Jadeveon Clowney, and Hopkins, and Watson can learn without all the pressure of trying to single-handedly resurrect a downtrodden franchise.

He also has a few former teammates on hand in defensive tackles D.J. Reader and Carlos Watkins, along with Hopkins, and his former head coach thinks the Texans assured themselves of a Super Bowl with the Watson pick.

“This is just ideal. It’s just ideal. It’s so rare that a quarterback gets the chance to go to a playoff team where there is no established starter,” Swinney said last week. “It’s a great opportunity for him. He’s got a strong structure. There is a good culture and a good organization in place there in Houston. I Think O’Brien is a heck of a coach. Obviously, he’s got a good supporting class around him. They’ve got a heck of a defense, and J.J. [Watt] didn’t even play last year. And of course, he gets to throw the ball to DeAndre [Hopkins]. I think it is the perfect fit and the perfect situation for him. I think Houston just won a Super Bowl. I don’t know if it’s this year, next year or the next but it’s coming.”