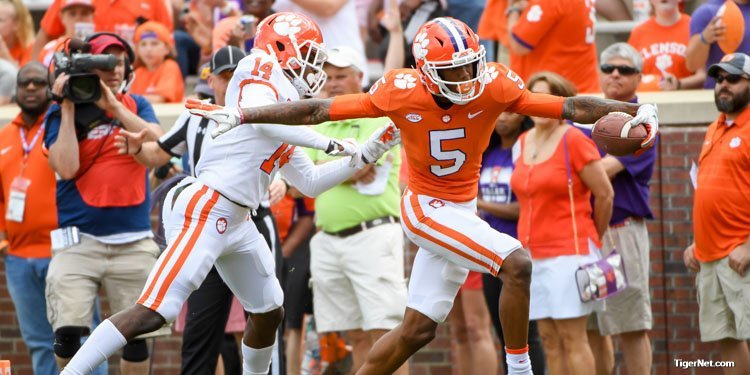 Will Tee Higgins have a breakout season in 2018?

After looking at the running backs yesterday, our TigerNet panel continues with another intriguing position to watch in 2018, at wide receiver.

1. Going into August, Tee Higgins and Trevion Thompson are listed as co-starters at a boundary receiver position that’s anchored the Clemson passing game over the last two seasons. One’s a sophomore and one’s a senior, what kind of impact will they make this season?

David Hood: I love Trevion Thompson, and I am a huge fan of his leadership and work ethic. I like the fact that these two came out of the spring listed as co-starters on the roster because it continues to push Higgins.

Here is what you need to know about Higgins - I spoke with one of his high school coaches recently, and he said that Higgins didn’t have to work in high school to be better than everyone else. It has taken the former 5-star a while to learn that even if you have talent on the collegiate level, you still have to work hard.

Higgins spent a season as a backup and the coaches challenged him during the spring to be better, and around the midway point the proverbial light came on. Higgins will get the majority of the snaps as the season progresses, but Thompson can’t be overlooked.

Rink: Higgins gave Tiger fans a taste of his improvement over the offseason in the spring, including fighting off a defender for a 50-yard TD connection from Trevor Lawrence. He has the size and athleticism to make a big leap in production from a freshman campaign where the bulk of his yards and both touchdowns came versus an FCS foe (178 of 345 yards versus The Citadel).

A summer enrollee last year, Higgins spending a full year on campus to work on strength and technique should combine with his natural ability to be on an All-ACC level as a sophomore.

Thompson has waited his turn and the former four-star receiver should eclipse 11 catches in a season for the first time as a Tiger, but I’m not quite convinced the bulk of that comes at the boundary spot. Coaches have lauded his versatility and technique, which means he can step in where there’s some inexperience at the 2-man/field receiver and also spot Hunter Renfrow at times in the slot. Higgins’ ability isn’t the only factor pushing him to other spots, as another big target in Diondre Overton should find his way on the field more this season - and 5-star summer enrollee Justyn Ross looms here as well.

The biggest key for this position posting a big season may rely most on two other position groups’ improvement, at quarterback and on the offensive line. An improved catch rate from last season will do wonders as well in helping the QB.

Nikki Hood: Trevion Thompson is the old man in a relatively young receiver corps and while he comes across as a quiet guy, his leadership will be invaluable this season as Clemson’s offense tries to take another step forward.

The Durham (NC) native has waited his turn behind guys who are now vying for roster spots in the NFL, but this year is his turn. He’s been an unsung hero in games where he had catches in his career that won or sealed wins - the catch from Deshaun Watson at South Carolina in 2015 comes to mind.

Tee Higgins may be more gifted physically and athletically, but Thompson will leave his mark of the Clemson program before the season is over.

As for Higgins, I think the games against The Citadel and South Carolina last season gave him confidence and that he could play at this level. Confidence combined with a renewed commitment to working in the weight room and practicing his craft is all he needed to turn the corner.

I expect Higgins to lead Clemson in receiving yards and touchdowns when all is said and done in 2018 (or January of 2019).

A big question mark for national pundits is how good can Clemson’s wide receiver group be, but with guys like Thompson and Higgins leading the group they can once again be one of the top units in the country.

2. Hunter Renfrow led the team in receptions last season and obviously had a major effect on the 2016 title run - how does he wrap his Clemson career?

Rink: Renfrow is the picture of consistency in the Clemson receiver corps.

He has logged at least one catch in the last 28 games he’s played in and tends to turn it on in the end zone down the stretch, with nine of his 15 touchdowns in the final four games of a season. Pro Football Focus has him leading all ACC slot receivers with a 77.3 catch rate.

David Hood: I think Hunter will finish his career on a high note, but he won't lead the team in receptions. If Higgins or Amari Rodgers progress the way I think they will, both of those players will have breakout seasons. Renfrow is at his best when he’s overlooked, and the emergence of those two playmakers (and others) means he won’t have to carry the load. That’s a good thing.

He’ll be the guy that everyone overlooks because they’re focused on Tee Higgins, Amari Rodgers or the two-headed monster at running back.

Renfrow will quietly go about his business and at the end of the season he’ll be Clemson’s leader in receptions and have a couple of touchdowns, but his receptions will come when Clemson needs a first down to keep the clock going or keep a drive alive.

He’ll have an impact on every game and leave Clemson as one of the all-time fan favorites.

3. There are a number of underclassmen receivers with an opportunity to make an impact this season. Who’s your best bet to stand out this season?

David Hood: Tee Higgins and Amari Rodgers are the two that are poised to take that next step, but watch out for Diondre Overton.

Overton has size and speed and he was impressive during the spring.

Rink: In terms of the biggest impact, an easy answer is Higgins, but another one to watch is T.J. Chase, who is listed as a backup to Renfrow in the slot. He had about as impressive a film as any receiver on Clemson’s roster coming in but wasn’t in a great spot from a physical standpoint coming on campus. Jeff Scott tabbed him as a candidate to surprise this season and the opportunity could be there.

Nikki Hood: Everyone will point to Tee Higgins as the wide receiver they’re most looking forward to seeing in 2018, but I like Amari Rodgers.

Rodgers doesn’t have all of the accolades that Higgins does, but he just goes about his business, understands the work ethic that it takes to be a star and is determined to get better each and every day.

David Hood: Amari Rodgers, because he will also be a threat in the return game