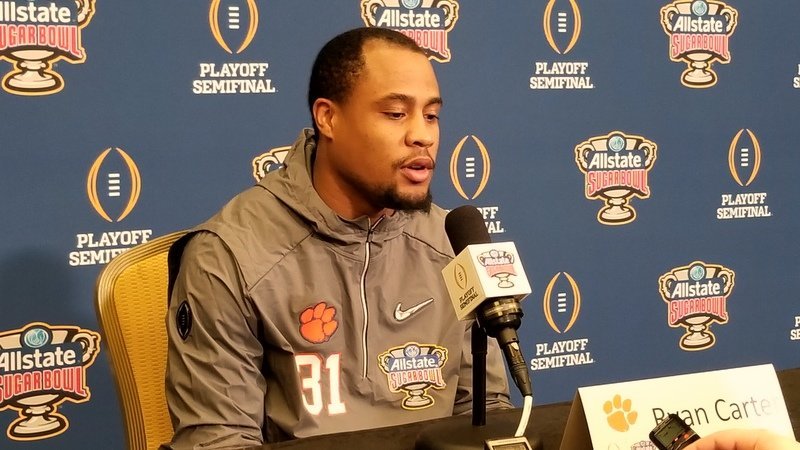 Carter is hoping to gain the attention of NFL scouts

CLEMSON- Ryan Carter is throwing a Hail Mary when it comes to the NFL Draft.

Ryan Carter, a redshirt graduate cornerback for the Clemson Tigers, did not receive the same news as five of his teammates on February 6th - he would not be receiving an invitation to the NFL Scouting Combine.

When asked if he was shocked Carter responded, “Yeah sorta, I thought going in that I had a really good senior year, that I put a lot of good things on tape, but at the end of the day it’s their decision, their judgment.”

“It was a great experience. You know, I feel like it’s been prolonged, it’s taken forever,” Carter said. “But I feel really good about today. I came out here and tried to show them everything I can as far as working, showing that I’ve been working, even though I didn’t get into the combine”.

Being denied an invite to what is seen as the start of an NFL career had the opposite effect on Carter that many expected.

“Definitely a motivating factor, but just goes back to what coach Swinney (Dabo) always says, you control what you control,” Carter said. “So, I just try to come here and show them this is my combine, this is my way to show scouts that I have been preparing just as much as the next guy”.

When looking for answers as to what his next steps need to in the pre-draft progress, Carter told TigerNet he had asked scouts for advice.

“Just my technique, opening up, being strong, things of that nature,” he said. “I feel like I put a lot of good things on tape, maybe me working on my man technique, showing some of my special team’s film, because I feel like that will be a big way of me to get in the league, and stay there on special teams. Letting them know I don’t mind playing gunner on punt, anything that gets me on the field”.

Head coach Dabo Swinney recently compared Carter to former Tiger Adam Humphries. Humphries did not receive a NFL Combine invitation in 2014, but went on to sign with the Tampa Bay Buccaneers as an undrafted free agent. Humphries has since signed a one-year guaranteed contract tender with the Buccaneers in 2017, for $615,000. In 2018 the Buccaneers placed a second-round restricted free agent tender on Humphries.

“That’s definitely motivation for me”, Carter told TigerNet, regarding coach Swinney’s comparison. “When I first got here Humphries was here, and I always looked at him as a hard worker and somebody who doesn’t really say much as far as being loud, but just comes in here and does what he has to do, and takes care of what he needs to. For Coach Swinney to say those things about me is awesome, I love my head coach saying that about me. I’ll try to do my best as far as being like him. Adam is having a lot of success in the league right now. I know he just got that good contract so I tried to reach out to him, as well as asking him things that he did in the process. Even just being drafted free agent, but also as going in as a try out”.