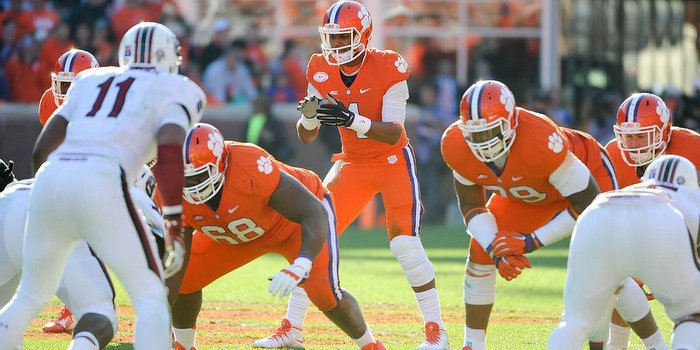 Watson runs for yards against South Carolina in 2014

CLEMSON – Remember the time a freshman ended an infamous streak while playing with one good leg?

Clemson quarterback Deshaun Watson was introduced to the Clemson-South Carolina rivalry during his freshman season, leading Clemson past South Carolina 35-17 on a gorgeous fall afternoon in Death Valley. The win ended South Carolina’s five-game winning streak in the rivalry, and Watson played the game with a torn ACL.

Watson finished 14 of 19 for 269 yards and two rushing TDs in his first significant action since defeating North Carolina State on Oct. 4th earlier in the season. He returned for a quarter at Georgia Tech in early November before suffering a knee injury that would keep him sidelined until the South Carolina game.

Watson said Monday that he wanted to play, regardless of the injury, and the game remains high on his list of accomplishments as a Tiger.

“It's very high. It's just one of the things I wanted to do,” Watson said in the WestZone Monday. “This is one of the teams you don't want to lose to. Just being able to play my freshman year on a torn ACL and flip it [the streak] and continue it last year was special. I am going to try and make it 3-0 this week.

“It's something that Clemson fans wanted to see happen and that 2014 team made it happen. We just have to worry about being 1-0 Saturday and not continuing the streak.” 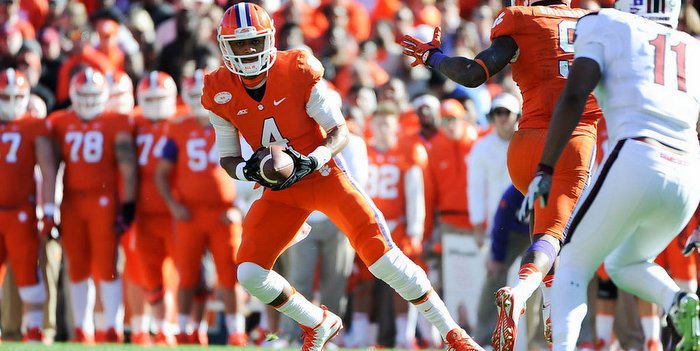 Watson runs for yards against South Carolina in 2014 "

Playing on a torn ACL? Not a big deal to someone like Watson.

Watson grew up in Gainesville, Georgia, and he says he didn’t understand the rivalry until his freshman year.

“Not really until my freshman year. A little bit my senior year of high school because I came to the game, but I didn't really feel the tension and the hate between each other, especially during the week, until my freshman year,” he said. “I grew up a Florida fan, so I was used to the Florida-Georgia rivalry and not so much Clemson and South Carolina.”

He understands what it means now.

“Forget the records; this is just one of those games you want to win,” Watson said. “You want to have the bragging rights for 365 days and be able to prove that you were the better team. We have to go out there Saturday and do that. That was one of the goals I set coming to this university, and now I have to continue it.

“All games are pretty big, but this game has that little extra juice to it just because it's the in-state rivalry and the state championship. There is so much tension between the two teams and the two universities. It's always good to get to this week and be able to prepare and play in it.”

Watson says Will Muschamp tried to recruit him to Florida

“Actually, he did but I was already committed to here. I was a real big Urban Myer fan and Tim Tebow and those days. As a young guy that is where I wanted to go. Muschamp is a great guy. I have talked to him before. A great coach too.”

Was Wake Forest his best outing

His last run down the hill

“I am just going to cherish the moment like I do each and every week. Regardless if it is or not I treated every game like it is going to be my last because you never know when that last play is going to come and your career can be over so I always have that mentality, but we will see what happens and just continue to embrace everything that comes with having a home game and just having that pride of wearing this jersey.”

Decision on the NFL

“It's up in the air. I just pray about it. We will figure that out later on down the rest of the season.”

What does he want his legacy to be?

"Just a man of God doing the right things at all times who goes about his business with great character. Who loved to help people and inspire people. Just a student-athlete that works hard to be the best he can be on and off the field and just a servant leader that loved do the right things and had a great mentality to be positive and can achieve anything you want."

"It is not a main priority but of course I am always going to pull for the ACC conference. Best of luck to all those guys this week that's playing against the SEC. Pull it out and take over."

Has he seen Jake Bentley?

"I have not. I haven't been focused on them. I have been just focusing on this team and being the best I can be so I really can't say anything about him. Best of luck to him in his career. I bet he will do great things too for that university."