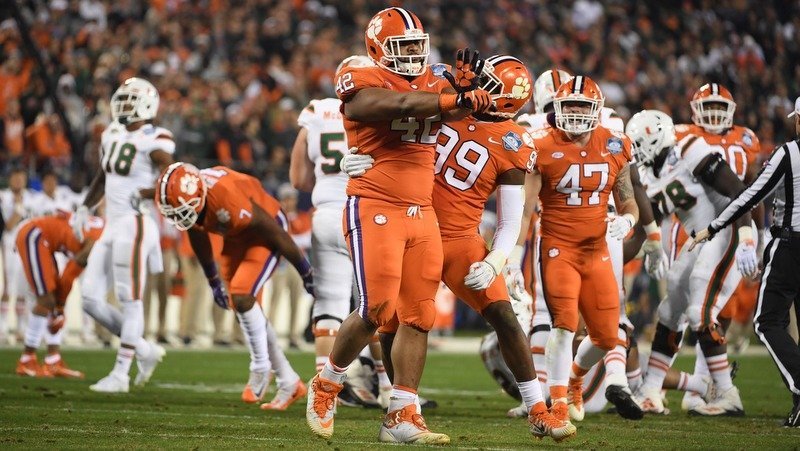 NEW ORLEANS, LA – The trilogy. The rubber match. Call it whatever you want, but Clemson and Alabama know each other well and both teams are talented. The winner will be the team that wants it more, according to Clemson defensive tackle Christian Wilkins.

Over the last two seasons, Clemson and Alabama have been the kings of college football. Alabama defeated Clemson to win the national championship at the end of the 2015 season. Clemson returned the favor a year ago, knocking off the Crimson Tide in Tampa’s Raymond James Stadium.

The winner of Monday’s Allstate Sugar Bowl won’t be crowned the national champion quite yet – the winner goes on to play the winner of the Rose Bowl in the National Championship game in Atlanta. For both Clemson and Alabama, however, there aren’t a lot of secrets.

“Well, you kind of really just know your opponent. You know what they like to do,” Wilkins told the media Saturday. “You know the personnel. There are no secrets what the teams are going to do. It's going to come down to who wants it more. That's the biggest thing, and who is mentally locked in the longest and who is prepared to go the distance because you know this is going to be a tight game. And you just have to be mentally dialed in and just focusing and just ready to do your job. That's going to be the biggest thing.”

Wilkins said the Alabama offense is playing better than it did a year ago.

“Really the biggest difference is that you can see the players made a lot of individual strides. A lot of guys they had last year are back this year, just their confidence, it seems like, or their overall ability to do things is way better,” he said. “Starting off with [Jalen] Hurts, he is throwing that ball. He's swinging that thing. He's done a lot better than last year, and you can see his confidence. He was pretty confident as a young guy, but even another year of experience, he is never rattled which is impressive to see.

“Their running backs, just better and better. I see Damien Harris taking off -- I think for two games, he just had a first play, house calls. It was like, "oh, man, all right, yeah." And just like the skill guys, they got speed and talent on the outside and everything which is impressive and everything like that. And the O-line is talented, strong and moving people, so we have to put our big-boy pants on there.”