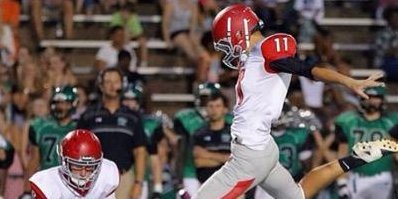 While many of the area’s top recruits toiled in front of Clemson’s coaches on the main practice fields at head coach Dabo Swinney’s high school camp, one recruit kicked for the coaches away from the hype and hoopla.

South Mecklenburg (NC) kicker Jonathan Doerer (2017) kicked for Swinney, special teams coach Danny Pearman and assistant Brandon McComb during the camp last week, hoping to pick up a Clemson offer. He was fortunate enough to kick for the coaches that matter.

Doerer felt like he did well enough to get another look, and Pearman told him to be patient when it comes to an offer.

“I felt I did pretty well. I didn't do my best but I hit the ball decent enough to show them that I have some good ability and I can be a decent player down the road. He (Pearman) just told how hard it is to get an offer as a kicker or a punter. Often times, we're the last guys. He just told me to be patient with them, and I understand that. It's worth the wait for a university like Clemson.”

Doerer has just one offer, but a number of major schools are showing interest.

“My only offer is from Army (West Point), but I'm hoping to pick up more in the coming days” he said. “Any offer, I'll obviously entertain because a kicker isn't going to get too many. Some schools that I'm looking at pretty hard are Clemson, Maryland, Georgia, UNC and South Carolina. I'm just trying to figure out where all of these programs are at right now.”

Doerer said the longest field goal he’s hit in a game is 49 yards, but he’s hit 50-plus in practice. Last season, he was 10-of-16 on field goals but earned touchbacks on 95 percent of his kickoffs. For a team that has struggled in kickoffs since Bradley Pinion left for the NFL, Doerer could be a nice addition.

Until then, however, he’s going to attend as many camps as possible and try to reel in that elusive second offer.

“That's the plan for right now. I just want to make sure I get in front of as many coaching staffs as possible and try to keep momentum, going,” he said. “It's difficult to find a place as a kicker, but I'm fortunate to have some good opportunities that I'm trying to make the most of right now.”

Doerer has a strong leg and finished first in the kickoff portion of the Kohl’s Professional Kicking Camps 2016 Spring Showcase, and Kohl’s had this to say about his performance:

Doerer hit an 86 yard 4.4 KO in May of 2016 at our Southern Showcase. He may have had a 10 mph tailwind at most. His FG consistency has improved since the last time we saw him. His athletic ability is rare and he should get multiple D1 offers due to the specialness of his leg strength. Doerer can punt but his kicking is currently ahead of his punting. Doerer made 9 of 10 charted FG in May of 2016 and is ready to have a big summer in 2016.

Charting results are in for the last stop on the '16 Nat'l Showcase Tour.