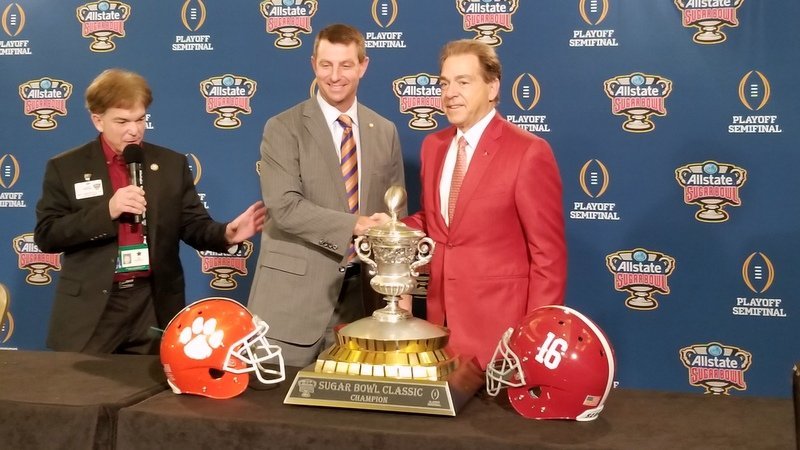 NEW ORLEANS, LA – For Nick Saban and Alabama, Monday’s Allstate Sugar Bowl wasn’t just about winning a game and advancing to the National Championship. For Saban and the Tide, it was personal and Clemson was the target.

In last season’s National Championship Game, Clemson defeated Alabama 35-31 en route to winning the title. To Alabama, that was a slap in the face, a threat to the program’s proverbial manhood. And they entered the third game of the series determined to do something about it.

Mission accomplished. Alabama throttled Clemson 24-6 in a game that was even more dominating than the final score indicated.

“I think this game was about sort of our identity as a team. And I don't think that anybody could question the relentless competitive attitude that we played with, warrior-like mentality out there,” Saban said. “And it's certainly what we needed. There are things that we could have done better, but I'm proud of the way our guys competed in the game. And I think that was the difference in the game.”

Saban wanted to see his team play with toughness.

“The toughness that we played with, the effort that we played with. We were able to affect their quarterback, stop the run,” he said. “Got off the field early in the game on third down quite a bit. We played the kind of game we wanted to play on offense. We wanted to run the ball. And 2-yard run wasn't a bad run because we didn't want to get in a lot of third-and-long situations. And we did a good job of keeping the ball in the game and scored when we had the opportunities to score.”

In other words, it was personal.

“I think, as a team, we had a mentality of don't remember the wins, remember the losses,” Hurts said. “And we never forget what happened, but we wanted to take it in as a learning experience and learn from it. And we had the opportunity to do that today and display it. And we overcame it, and we got them. We will go to the national championship game.”