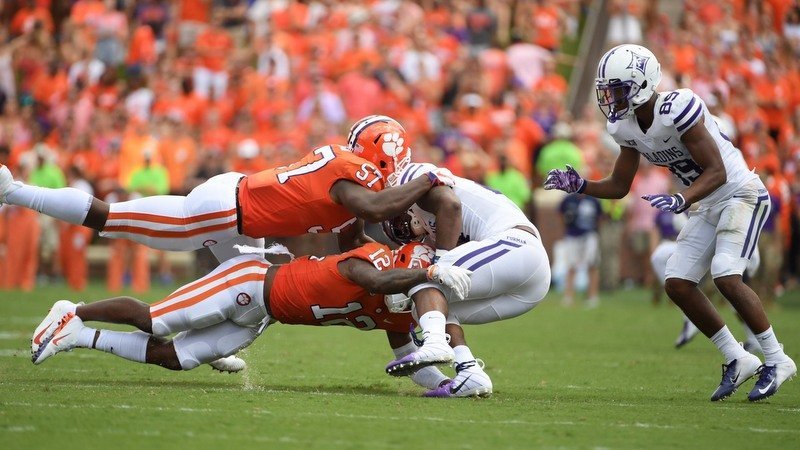 Clemson's defense corralled Furman most of the day Saturday

Clemson gets its first big test of the season Saturday when the No. 2 Tigers travel to Texas A&M and there are storylines galore.

The Tigers dispatched Furman in easy fashion Saturday while Texas A&M drubbed Northwestern St. Thursday night. There wasn’t a lot to take away from either performance, but there are a few things that stood out to me in the win over Furman.

First off, kicker BT Potter is a weapon that Clemson has been lacking since the departure of Bradley Pinion. Potter’s kickoffs were always deep, several were through the back of the end zone, and I can see a scenario where Potter trots on the field to attempt a 60-yarder this season.

Potter was just one of the freshmen that shined, but all eyes were on quarterback Trevor Lawrence. Head coach Dabo Swinney has already mentioned that both Lawrence and starter Kelly Bryant will play next Saturday, and you have to wonder if it’s just another step in the process of figuring out who the long-term starter will be or the beginning of a two-quarterback system that we will see all season.

I am not sure if the coaches know at this point. Bryant didn’t do anything to lose the job and I don’t think Lawrence did enough to win the job outright. They both had their good moments and they both had throws and decisions they would like to have back. It will be interesting to see not only how much Lawrence plays in College Station but when he will enter the game.

During the Sunday night teleconference with the media, ESPN’s David Hale asked Swinney the plans for quarterback against the Aggies, and Swinney laughed before answering.

“I certainly wouldn't lay out what our plan was before we went into a game,” he said. “You'd like to have some secrecy before you face an opponent. I will just tell you both will play. We'll keep it internal as far as how we'll manage it."

To his credit, Swinney didn’t go all Nick Saban after the question.

As for A&M - ESPN’s College GameDay will be in town for the matchup, which worked out well for the Tigers last season. GameDay was at Louisville and Virginia Tech for Clemson’s road games last season and the Tigers won by 26 and 14 points.

Swinney said the coaches will speak with the younger players about what they can expect at A&M.

The matchup also features a ninth meeting between Swinney and new A&M coach Jimbo Fisher. Fisher was 4-4 against Swinney during his tenure in Tallahassee but won four of the first five before dropping the final three.

"I don't know. I cannot seem to shake him. He's been a tough competitor,” Swinney said of Fisher. “We have a long history. Every time we have played, it's usually been a battle. This one won't be any different. He's done a great job."

I watched the Aggies during their Thursday win and saw a lot of two tight end sets. A&M is probably going to use a lot of two tight end sets to help its linemen at the point of attack but also to chip and help out on Clemson’s defensive line. I also expect them to use more screens, misdirection, and movement involving quarterback Kellen Mond to get the Tigers flowing one way and then come back the other.

Swinney said Fisher has always made effective use of the tight end.