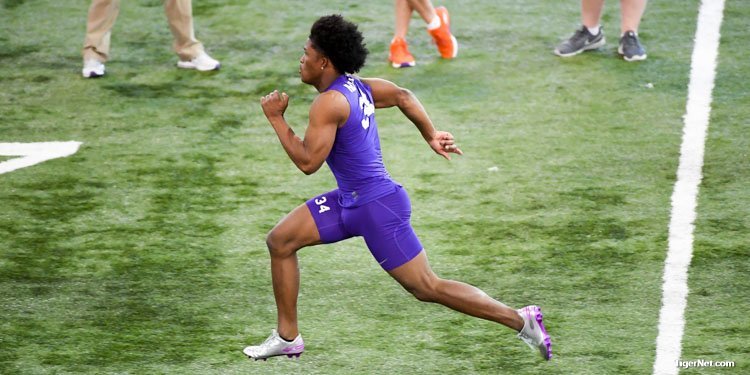 CLEMSON – Ray-Ray McCloud wants teams to know that he can be a weapon anywhere on the field, and he showed just that during Thursday’s Pro Day when he worked out at both wide receiver and defensive back.

After amassing 127 catches for 1,226 yards four touchdowns, McCloud is known for is speed and elusiveness but the Tampa (FL) native showed his versatility as punt returner and cornerback while at Clemson.

While McCloud hopes to make it in the NFL as a wide receiver, he elected to work out with the defensive backs, as well, on Thursday.

“I gave it all I’ve got. I thought we were going to do receivers first and then DB's after, but DB's didn't want to go first, so I did half of that,” McCloud said. “It was only me and Deon as receivers and we were going to go back to back with ladder routes. The coaches wanted to see me backpedal a little bit and I showed them that. I ran routes and that's what I came here to do.”

As a 5-star recruit, McCloud is no stranger to being courted by coaches, but he said there is far more pressure when his future and livelihood are on the line.

“Exhausting, but it's a once in a lifetime opportunity, just like recruiting in high school - you're taking visits here and there and it's the same with this process,” he said. “Going to the combine, getting 40 minutes of sleep at night to go have a drug test and having different things you have to do. It takes work, but it's worth it in the end.”

However, Pro Day at Clemson was a little less stressful with teams wanting to get to know McCloud on a personal level.

"They were different. They were not what I practiced back in Boca," he said. "Just more of getting to know me and my family, my type of personality and how I liked to be coached. It wasn't as much about me and football as it was me as a person."