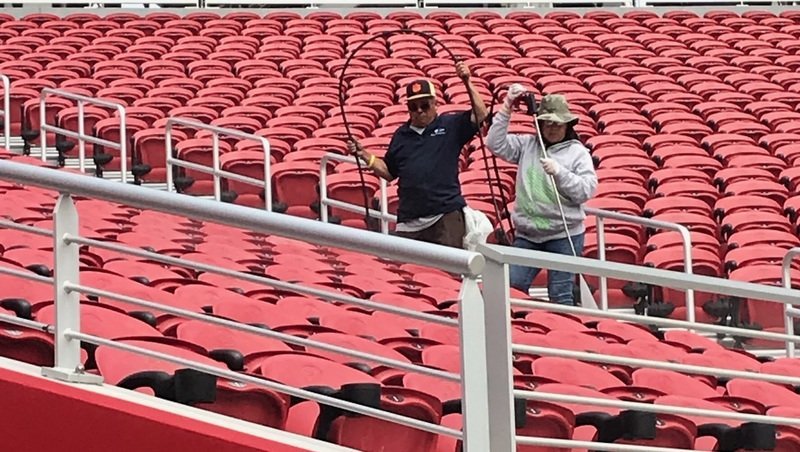 Clemson head coach Dabo Swinney smiles when he’s asked if he’s superstitious and comes back with one of his typical replies.

“I’m not superstitious,” he says with a knowing wink. “I’m only a little ‘stitious.”

Before the 2016 National Championship Game in Tampa, Swinney stood on the Tampa Bay Buccaneers practice field the day before the game and pointed to Raymond James Stadium and told his team he had no doubt they were going to beat Alabama for the title.

He also told his team that before the game and at halftime.

“And man, just, I’m just so thankful and blessed. It just doesn’t even seem real to me.”

Swinney caught a glimpse of the future last May in a photo, something he held on to for months before showing his team. It was a glimpse of Clemson’s win in Santa Clara in Levi’s Stadium.

It all started late last May when Clemson sent an advance team to Santa Clara, Calif., to check out the stadium, the area, and possible team hotels. The College Football Playoff invites certain teams for an early and advanced look. Swinney sent a team that included Mike Dooley (Director of Football Operations), Woody McCorvey (Dabo’s former coach and right-hand man who has the title of Associate Athletic Director of Football Administration), Jennifer Benton (Administrative Coordinator of Football Operations), Ty Clements (Director of On-Campus Recruiting), and Morgan Tadlock, who was then a football recruiting assistant.

The group was taken on a tour of Levi’s Stadium, and as they walked on the field, they looked into the stands and saw just two people. Two workers were there power washing the stadium steps, and as Dooley and McCorvey got a little closer to them, they noticed something – one of the workers was wearing a Clemson National Championship hat from 2016.

They quickly snapped a picture and texted it to Swinney, who took it as an omen.

Swinney kept the photo a secret for months, only releasing it to his team late in the season. It was a sign that the Tigers were destined to play for the championship. They did, defeating Alabama 44-16 to win the school’s second title in the last three seasons.

Did it help win the Tigers a title? No, but it’s just another one of the few fun nuggets of information that have followed this program over the last several seasons.

Now…who wants to go to New Orleans and hand out hats to the workers in the Super Dome?