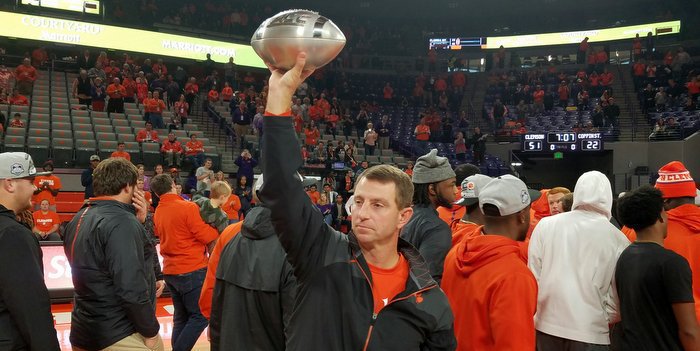 CLEMSON – The formula for winning a National Championship is simple for Dabo Swinney.

Clemson entered last year’s College Football Playoff as the No. 1 seed and they finished second. Swinney wants to flip the script.

Second-ranked Clemson will take on third-ranked Ohio St. in the Fiesta Bowl on New Year’s Eve, and Swinney told the crowd in Littlejohn Coliseum Sunday afternoon that he wants a different outcome this season.

The Tigers No. 1 in the 2015 College Football Playoff rankings but ended the season as a runner-up to Alabama, and this season Swinney said they want to flip the script.

“We're very honored to be back in the playoff. We earned it; there's no question about it. We all know that nobody is going to give Clemson anything,” Swinney said Sunday afternoon. “Little old Clemson, back to back in the College Football Playoff and right where we belong. We're looking forward to going back to Arizona. Last year we went into the playoff No. 1, and we finished No. 2. This year our goal is to go in No. 2 and finish No. 1. We're four quarters away from having that opportunity. Every play matters. Every day matters. I hope we'll have a great crowd out in Arizona.”

While Clemson shocked the world last season with its perfect regular season and its trip to the national championship, Swinney said it was more difficult to make it back to the College Football Playoff because the Tigers weren’t going to take anyone by surprise. 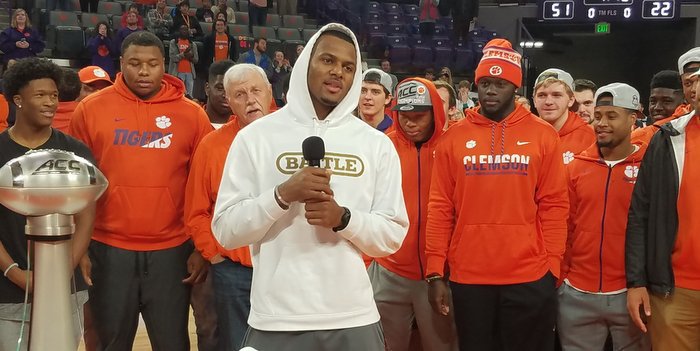 “I think definitely to get back is more difficult. I don't think there's any question about that. To sustain success is difficult because sometimes people can get complacent and things like that,” Swinney said. “To maintain a sense of urgency, the standard of excellence, the daily commitment, to pay the price all over again, that speaks to the culture that we have in place. Last year we were kind of America's team, if you will, and you could feel a lot of energy and a lot of people pulling for the Clemson Tigers. We were so driven to do something that hadn't been done in a long time. We won 14 games, and we came up one short, but this team has a different mindset and a different perspective because they've been through that journey. It's good, but definitely harder to do it again.”

Clemson was in Arizona last year for the national championship, but Swinney said he doesn’t remember a whole lot about the trip and is looking forward to exploring the Grand Canyon State this time around.

“I am. I don't really remember it last time. It was such a blur. It was such a business trip. It was like a little longer road trip for us. We got out there, and we had a little banquet, a press thing, one practice, and it was boom it's the game,” Swinney said. “It was such a focused situation. I don't remember a whole lot about it other than we were at a great hotel and the venue was incredible. It was a beautiful stadium. I look forward to going out and being able to get ingrained in the community a little bit more and check out the area.

“I actually played in the Fiesta Bowl in 1990, so I spent a week out there and had a chance to move around Phoenix as a young buck, but in my much wiser days I look forward to seeing Arizona through a different lens this time around. We'll spend some time. We'll make sure we enjoy the trip. This is the bowl part of their postseason, so there will be a lot of things that we'll do and the guys will get a chance to see what Arizona is all about. I've got some guys out there with Cardinals, so I look forward to hooking up with them. It's going to be fun. It will be a lot of fun. We've got a lot of logistics to plan, but I'm definitely looking forward to it.”