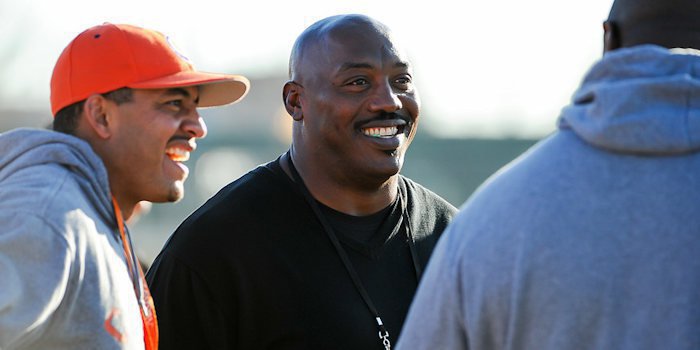 Kirkland played at Clemson from 1988 until 1991 and was a two-time All-American.

GREENVILLE – What would Levon Kirkland’s rating have been if the scouting services that exist today existed when he was a senior at South Carolina’s Lamar High School? Four-star or five-star?

The former Clemson linebacker and star of the Pittsburgh Steelers is in Greenville this week to be inducted into the South Carolina Football Hall of Fame. Kirkland’s induction was held Thursday evening at the Hyatt Regency in Greenville, and he shared with TigerNet his memories of his recruitment to Clemson.

Kirkland played at Clemson from 1988 until 1991 and was a two-time All-American, a three-time All-ACC selection and a 2001 Clemson University Hall of Fame inductee. However, he says he wasn’t seen as a prospect until his senior season at Lamar.

“It's an amazing story. I got what they call discovered because you have to think back in 1986 and 1987 there were no internet services,” Kirkland said. “There were no recruiting services, so the word got out by newspaper or they just happened to see you when they were recruiting another guy and that's what happened to me. We were playing in a playoff game against Chapin and they were recruiting someone else and they happened to see me play that game. My head coach at the time told, 'Hey, there are some recruiters out there,' and that's all I needed to know. I had a great game. I got a letter from South Carolina and I was thrilled for a minute and then Clemson came along and that's the end of the story.”

Kirkland said he couldn’t believe he had an offer from a school like Clemson.

Kirkland played at Clemson from 1988 until 1991 and was a two-time All-American."

“It's amazing, it really is, because I do come from humble backgrounds - from a hard working family, small town and Clemson was such a big idea at the time,” he said. “To be able to push through that and to do as well as I did at Clemson and this career that I've had has been a blessing. I have to thank the people I connected with and the relationships I had. It's amazing.”

There was little fanfare back then when Kirkland signed with Clemson.

“There were maybe five people at my signing - myself, my father, my head coach, Coach Larry VanDerHeyden and the camera guy," Kirkland said. "I don't think anybody knew about my signing day besides me. Now, everybody gets the hats, the big ceremony. After I signed, me and my father walked out, I hugged him and it was a great day for me.”