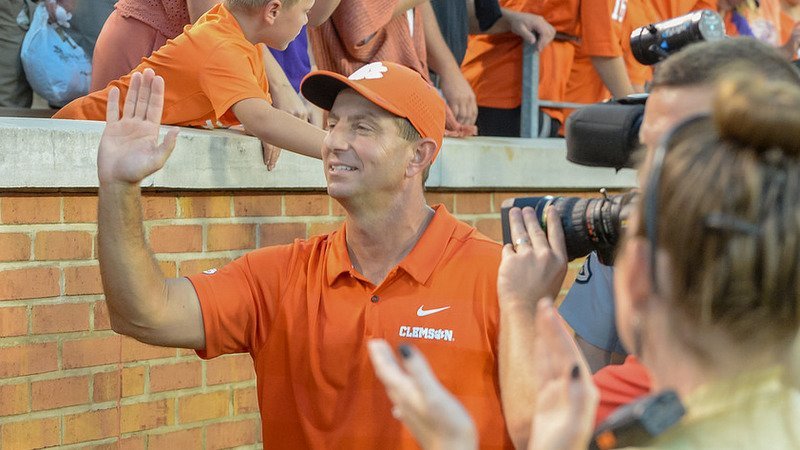 CLEMSON – Second-ranked Clemson has a chance to win a fifth consecutive game against South Carolina this weekend, but don’t expect head coach Dabo Swinney to start throwing 5-bombs around. Why? He is still lamenting and lugubrious over South Carolina’s own five-game winning streak.

The Gamecocks won five in a row before Clemson’s current four-game streak, and Swinney was the punchline in several photos where South Carolina fans asked for a picture, only to throw up a 5-bomb in mockery.

Swinney said Tuesday he only cares about the objectives that are still on the table for the Tigers.

“You won't see me doing in 5-bombs or any of that stuff if we were to win,” Swinney said during his weekly press conference. “I'll just be happy that we won the game. I'm all about what's in front of us and what's after that.

“This is an exciting week. This is the season for us and then South Carolina. This is a goal of its own for us. It's important to everybody in this state. It's a lot of fun to be able to participate in rivalry games. It's something that's been woven into my life my entire 49 years. It's always a special week.”

Swinney said it’s important to beat the Gamecocks and have more wins than losses against a top rival.

“It's important (to have a winning record). I think we've done a good job with all of our goals but we've still got some work to do that,” Swinney said. “I just want to win every year. Every year is important. Every year is a season of its own. It stands alone. The biggest thing we wanted to do is become more consistent in achieving this goal, so we've done that but we got off to a slow start. Hopefully, we can continue to have good consistency in this rivalry. I want to win not for me. I want to win for our team. I want to win for our fans. I want to be one of the few 12-0 teams in college football. There aren't many 12-0 teams at any program historically. This would be a great achievement for this group. It's not about me.”

The five-game winning streak by the Gamecocks? Swinney shook his head at the painful memory.

“I'm still lamenting that. I'm still very lugubrious. Not happy,” Swinney said. “That was a tough stretch for sure. At some point, they're going to beat us again. That's just life. That's just football. Hopefully, not in my lifetime, that'd be great. Hopefully, not this year and hopefully not in the next many years but chances are eventually they're going to win a game. I just want to make sure we can keep our program consistent and continue to have a good program and year in and year out have a chance to compete consistently in this championship and in our league and our beyond.”

As for the 5-bombs and the disrespect shown by children – Brent Venables said Monday he’s seen children talk smack to Swinney at youth league games – Swinney said it starts with the parents.

“I've grown up with that. I get it. It's surprising sometimes that parents allow their kids to speak to adults sometimes but I just keep on moving,” he said. “What's acceptable to some parents isn't acceptable to other parents. I take pictures with anybody, I don't care - Gamecock fans. I don't have any ill will toward anybody. At the end of the day, we're all on the same team or we should be in a bigger picture. Sometimes people coming up taking pictures and trying to 5-bomb you and parents having fun with that. I would never allow my kids to do that, but that's me. Everybody has to parent the way they want to parent. As far as the normal, 'You stink,' 'Go Gamecocks,' and 'Roll Tide,' that good fun and it goes both ways.”