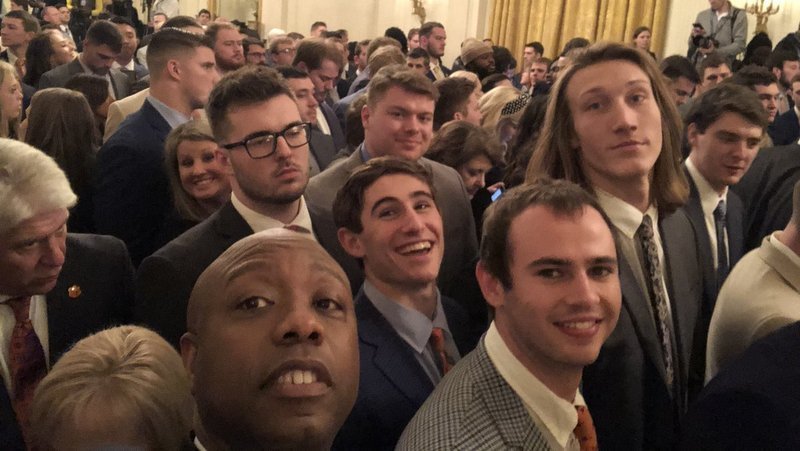 Monday’s trip to Washington, D.C., was different than Hunter Renfrow’s first trip to the nation’s capital and the White House. Instead of searing June heat, snow covered the ground. Instead of a huge ceremony on the front lawn, the setting was more intimate. And it was a final chance to spend one last bus ride with his brothers.

Clemson’s football team made the trip to Washington Monday to celebrate the team’s National Championship, and Renfrow embraced the chance to be with his teammates.

“For me, it was the last opportunity to be with the team. Everyone is kind of going their separate ways after the banquet so for me it was riding on the bus from Greenville back to Clemson and spending that whole day with guys that I've done life with over the last four or five years,” Renfrow told TigerNet. “It was fun to enjoy that one last team outing. Last year we did it in June so we knew we would get back together, but this was the last opportunity for us to be together.

“I loved that it was the exact opposite of the last time we went. The last time we got there early, and it was super hot outside, and we went to the Capitol. This time we went to the Washington Monument, Lincoln Memorial, World War II Memorial and the Vietnam Wall. We got to see the history of Washington. It was cool that it was snowing. We would throw snowballs at each other, and we slid down the steps because it was icy. It was a fun time.”

After spending time seeing the sights, the team made the trip by bus to the White House.

“We pull up, and the German Shepherds come out and sniff the bus and they open the hood of the bus and get the mirrors underneath it to make sure there's nothing there,” Renfrow said. “It was cool that we rolled right up, go through some more security and then we're in.”

Renfrow was also excited about the chance to see the Oval Office.

“It was cool that the whole team got to go into the Oval Office. Last time, only about 10 or 15 guys - the team captains, three or four other players, and the coaches got to go,” Renfrow said. “This time Trump brought all of the players in, and it was cool seeing that. The whole front lawn of the White House was covered in snow, and there was one 30x30 patch of grass and Trump actually landed right in front of the White House on that green part at 5:40. We were all huddled up around the windows taking videos, so it was pretty cool.”

Due to the government shutdown, the President bought fast food for the team, something that Renfrow also embraced.

“I get to tell my kids that I ate a Big Mac in the White House that Donald Trump personally bought,” Renfrow said. “I guess with the government shut down they're short on stuff. He said he personally bought all the food.”

The team learned about the buffet during the trip to Washington.

“A lot of us were on the bus on the way to Greenville, and we saw where Trump was saying we were going to have McDonalds and Dominos and Burger King, so we were all getting excited about that because we get to tell our kids that we ate a Big Mac and a Whopper in the White House and that's something you can tell everyone forever,” he said.

“I loved it. I think it was just like Coach Swinney because he would do something like that. I feel like Coach Swinney talked all year long about we're just raggedy old Tigers so we got some raggedy old food. I don't think anybody was talking about the food two years ago when we went. I can't remember what we had. It's a unique story and something we were a part of, and I think the team enjoyed it.”

Like his time on the field, Renfrow enjoyed and savored his time in the Oval Office.

“I think last night on the plane I could sense the excitement of everyone. Like I said before, because everyone got to go in the Oval Office, I think it meant a lot to people because some of the most important decisions in the world are made in that office,” he said. “To have Trump to be that hospitable. I was talking to the girl who was kind of in charge and I asked her if this happened often and she was like, 'No, we're completely winging it right now. He doesn't ever do this.' I think he just appreciated what we did and he appreciates Coach Swinney and President Clements as leaders to be able to do that.”

While the team was in the Oval Office, Trump told quarterback Trevor Lawrence that New England Patriots quarterback Tom Brady had mentioned the dynamic Clemson freshman.

“I know he talked to Trevor about Tom Brady talking to him about Trevor,” Renfrow said. “He said Tom Brady doesn't usually talk about quarterbacks, doesn't really talk about players in college but he had remarked to Donald Trump about Trevor and how well he played. Trump said he and Tom Brady are really good friends. That was pretty cool.”