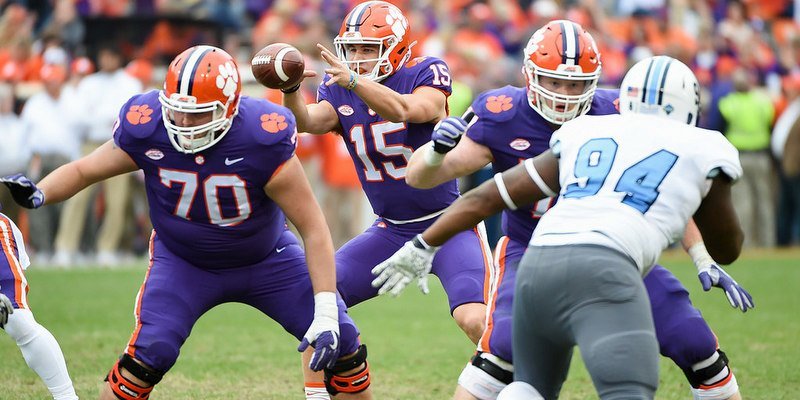 CLEMSON – Many teams around the country struggle to put one decent quarterback out on the field each week, and the Clemson coaches have to consider themselves fortunate that three good quarterbacks took snaps in Saturday’s 61-3 victory over The Citadel.

Starter Kelly Bryant was 17-for-22 for 230 yards, Johnson was 7-of-8 for 144 yards and a score and Zerrick Cooper was 7-for-11 for 105 yards and another score. It marked the first time in Clemson history that the Tigers had three quarterbacks throw for over 100 yards.

Johnson said he felt like he would receive significant snaps this week.

“Definitely. Throughout practice this week we were getting some more reps because we were expecting to get in this game,” Johnson said. “I felt prepared when I got in there and I wanted to take advantage of my opportunity.”

Johnson connected with receiver Tee Higgins on a 78-yard touchdown pass in the third quarter.

“Tee kind of helped me out on the long ball. He made a good play on that,” Johnson said. “Before that play happened, we were talking on the sidelines and he was like, ‘Hey Hunter, throw me the ball a couple of times.’ I was like, ‘I got you. I got you.’ Sure enough, we just connected. It was fun.” 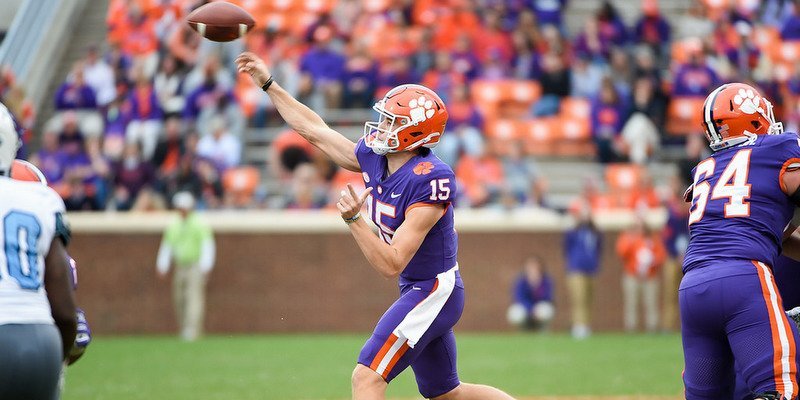 What was his mindset heading into the game?

“Just take advantage of your opportunity,” Johnson said. “You don’t know how many reps you’re going to get. Just go in there and the way Coach (Brandon) Streeter tells us to do it is to treat it like practice and go out there and execute the way we always have.

“I’m still trying to learn every day. We’re adding new things every week and I’m just trying to learn more and more and make myself better. In-game reps are always great just to get some live action and take some hits every once in a while because, in practice, they just tag off on me. I enjoy being able to go out there and be live and play fast and make decisions.”

"He’s made a lot of progress. He’s still learning," Swinney said. "It’s a lot. There are a lot of moving parts, but I’m just really proud of him. Nobody works harder. That kid is a grinder. He’s worked really, really hard and he’s gotten better with his protections. He did a great job executing today."

So what happens next season if Bryant returns? The Tigers will have Bryant, veteran Tucker Israel, Cooper, Johnson, Brice and Lawrence all on scholarship. Message board pundits think that one or more quarterbacks will transfer – especially with the threat of Lawrence – but Johnson said no.

“We’re all in there trying to make each other better and learn more. We’re here to get better. The coaches ultimately make the decisions to make the team a better team. All we can do is do our part and prepare as much as we can.”

What are his thoughts on having so many good quarterbacks on the roster?

“It makes us better. It’s why we came here,” Johnson said. “Clemson is a great place. It’s why we all came here. We all want to play football and compete and have fun.”