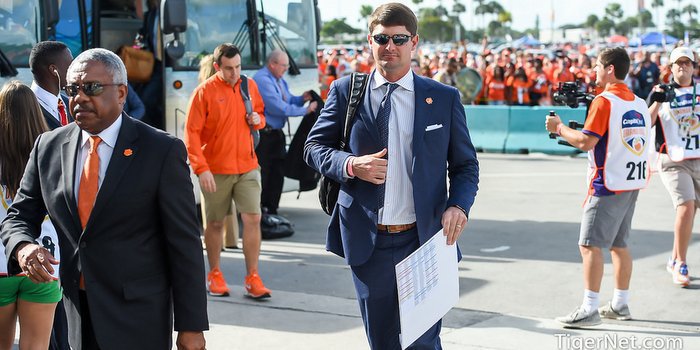 Jeff Scott said visiting with Grant Teaff was a treat

CLEMSON – It’s not often that a College Football Hall of Famer comes walking through the door, but when he does it pays to listen and something that Grant Teaff told the Clemson staff last week turned out to be a bit prophetic.

Teaff is the former Baylor head coach who has served as the Executive Director of the American Football Coaches Association since 1993. He was elected to the College Football Hall of Fame as a coach in 2001.

Last Monday, Teaff dropped in to see the Clemson coaches.

"Grant Teaff who is the head of the AFCA, very well-respected college coach and mentor for a lot of college coaches, just came through and was in town visiting Dal Shealy, maybe Monday of last week,” co-offensive coordinator Jeff Scott said Monday. “He's someone I've always looked up to and I actually had the chance to meet him.”

While he was in the offices, he made a statement about the Tigers that resonated with Scott.

“He came in our offensive room and talked with the offensive staff on Monday,” Scott said. “He said, 'I've been watching you guys several times this year and the thing I really notice about your guys is that it's one thing to get in a situation in the fourth quarter and you've got a big drive to hope you can get it done, but it's one thing to know you can get it done because you've done it before. Just having that in the back of your mind is very strong and powerful for you for the rest of the year.' That's kind of what I was thinking about there after the game. That was pretty prophetic there for Saturday's game. There's a lot of confidence obviously with everything on the line. It was amazing watching the guys go out there and execute with no panic like we've done this before because we've done this before. I thought that was really good.”

Scott said it was a thrill to spend time with Teaff, who has the most wins in Baylor history.

"It was good. I try to go to the AFCA convention every year. He's always up there in the front talking to thousands of coaches and very well-respected,” Scott said. “I've read a lot of his writings and things he's put out in the years. To have the chance to meet him and for him to make that comment told me he really has been watching us and I think there was a lot of wisdom in what he was saying. I watch a lot of college football and I just think back to 2013 Florida State and no matter what situation they get themselves in, they always find a way to win. We're not a championship team yet, that's what we're working towards, but that's what championship teams do. They find ways to win. It was great to have him here with Dal Shealy."

On winning at FSU

"Obviously, another great win. Tough environment, really proud of the guys for a lot of things. Got off to a fast start and that was really important playing a talented team down at their place. Really focused on getting off to a fast start and I thought the guys did a great job of that getting 14 points in the first two series. I wish we could have kept that going, we got in to a couple lulls there in the second quarter.

A great finish in the fourth quarter whenever we needed it. Just going back and watching the tape and watching with the guys this morning. There's countless third down conversions on drives where we're getting points. Third-and-5 and third-and-7 or third-and-10 and then two big fourth down conversions. Take those away and it could be a different game. As far as the turnovers, obviously the two interceptions were disappointing. Something that can be prevented, really pleased with guys holding on to the ball. That was obviously a focus in the open week as far as eliminating that. There were a lot of hard hits out there and guys coming from behind trying to knock it out and held the ball really well at key times. I think every week you've got things to clean up, but overall the guys did what it took to get the job done. Just my experience being around college football, the teams that can find a way to win at the right times are the ones that have the big years. That's where we are.”

“Moving on to Syracuse, I think with Syracuse you've got a confident team coming in. All of us saw the celebration in the locker room after the Virginia Tech game when they were a 20-point something underdog at their place and beat a very good Virginia Tech team. I think Virginia Tech's one of the top teams that we've watched on video this year. Really impressed with what they're doing this year. You could tell in the locker room that Coach (Dino) Babers is doing a good job and has those guys believing. They've won two in a row and went on the road the next week and beat BC on the road and they look a little bit more athletic than they have in the past. That's one thing we've noticed, they move around really well and #4 mike linebacker Zaire Franklin, I think he's a really good player. He moves sideline to sideline and makes a bunch of tackles. They're very well coached, fundamentally sound and play with great effort. That's another thing I've noticed, the effort that they've played with. They're running full speed all the time. You don't see any guys taking plays off. Definitely going to be another challenge and one we're looking forward too as we get ready this week."