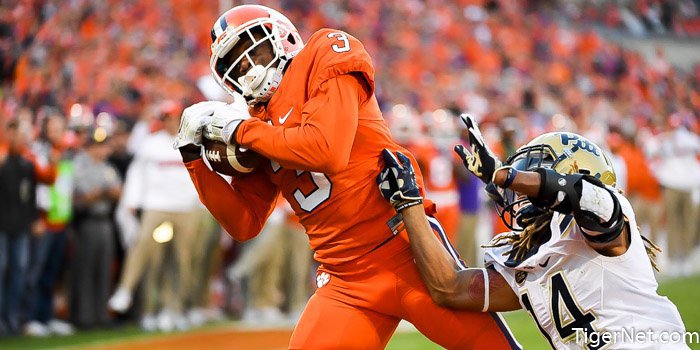 Scott hauls in a first half pass

After a crazy first half that saw a ton of offense and not a lot of defense, Clemson has a 28- 27 lead over Pittsburgh.

Clemson answered by driving the length the field on its first possession, but Deshaun Watson threw the first of his two first half interceptions on a fade to Mike Williams in the endzone.

Pitt took a 14-7 lead after three drives, but the Tigers responded with a Wayne Gallman one-yard plunge and a fade to Mike Williams in the endzone to take a 21-14 lead.

Pitt took exactly 33 seconds to respond, getting a 55-yard reception by Scott Orndorff for the score. The extra point bounced off the right upright and Clemson led 21-20.

The Tigers again marched down the field, but Watson threw his second interception of the day and Panthers did what they’d done all day – gashed the Clemson defense for chunk plays. On 4th-and-goal at the one, Peterman floated a pass to Aston for the score and Pitt led 27-21 with 2:23 to play in the half.

It took the Tigers a little over a minute to answer. Watson hit Williams for gains of 17 and eight yards, Leggett for 19 and Scott for 10 before dropping a perfect throw over Scott’s shoulder in the endzone from 13 yards away for the 28-27 lead with just over a minute remaining.

Pitt crossed midfield and reached the Clemson 35. Peterman spiked the ball with five seconds left to give kicker Christopher Blewitt a chance at a 53-yard field goal. The field goal was blocked by Lawrence, however, and the Tigers took the one-point 28-27 lead into the endzone.

PLAYER OF THE HALF:Pittsburgh quarterback Nathan Peterman had threw for a career-high 242 yards and four touchdowns on 12-of-18 passing.

STAT OF THE HALF:Pitt is averaging 9.1 yards per play.

WHAT WENT RIGHT: Clemson’s offense had 366 total yards – 45 on the ground and 321 through the air. Deshaun Watson showed no ill effects of a shoulder bruise, completing 24-of-33 passes for 321 yards and two scores.

Mike Williams had eight receptions for 142 yards and a score, while Artavis Scott added six catches for 60 yards.

WHAT WENT WRONG: The defense surrendered 356 yards in the first half on 39 plays. James Connor carried the ball 11 times for 96 yards and tight end Scott Orndoff had four receptions for 86 yards and a touchdown.

Clemson’s defense was allowing Connor to run up the middle for big gains and quarterback Nathan Peterman had tons of time to find open receivers.

TURNING POINT OF THE HALF: Pittsburgh got the ball back with 1:09 remaining in the half and was marching to take the lead, but after quarterback Nathan Peterman took a sack, the Panthers had to settle for a 52-yard field goal attempt, that was blocked by Dexter Lawerence.

WHAT CLEMSON NEEDS TO DO WIN:Clemson’s offense has been nearly unstoppable through the first half, except for turnovers, but the defense needs to get stops. Pittsburgh only punted twice in the opening half. The defensive line has to do better up front in getting pressure on Peterman and running back James Connor, while the linebackers need to be better in coverage on running backs and tight ends.