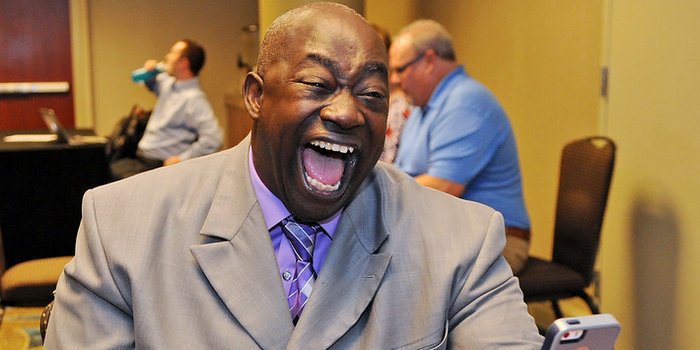 GREENVILLE – George Rogers proved Thursday night that you can put the hatred that runs deep in the rivalry between Clemson and South Carolina to the side and pull for someone you respect and admire. That’s why he voted for Clemson quarterback Deshaun Watson to win the Heisman Trophy. Twice.

Rogers was in Greenville as part of the South Carolina Football Hall of Fame festivities – Rogers was a member of the 2013 class – and he bounced into the media room full of his usual enthusiasm and love of life.

He quickly spotted my wife Nikki’s dress – it had orange designs on it – and laughed about “Clemson people.” When I pointed out that he was wearing a subtle shade of purple on his tie and dress shirt, Rogers broke into his trademark smile and admitted he was wearing the enemy’s colors.

“Yes, I have on purple,” Rogers said. “But that’s because of Deshaun Watson.”

Watson was also in Greenville on Thursday to receive his Player of the Year Award from the Hall of Fame, the second straight year he has won the award.

And he had the support of Rogers, the University of South Carolina great whose 1,781 rushing yards in 1980 was the best in the nation and earned him a Heisman Trophy. Rogers beat out an impressive group of players, including Pittsburgh defensive lineman Hugh Green and Georgia running back Herschel Walker.

As a former winner, Rogers has a vote, and he told TigerNet he voted for Watson.

“There is no question who I voted for. No question. Last year and this year. I did,” Rogers said. “I think they gave it out too soon. If they wouldn't have (given it out too soon) he would have won it.”

I asked Rogers if it was hard voting for a Clemson player, and he answered by saying that relationships with people can transcend the rivalry that runs deep in the Palmetto State.

“No, not at all. Because of Dabo (Swinney). Dabo is a great guy,” Rogers said. “I have been knowing him for years, and he is a great guy. When you find a coach that you can play for - like Jim Carlen, I could play for him - and when you get that combination, you can do anything. That is why they are winning. Because the players believe in it.”

“That’s BS. That guy has a National Championship, and he could have won it the year before,” Rogers said. “He should have had two. If they had the ball a little bit longer in that first one, they would have had two. And Deshaun is just a great athlete, and he's a humble athlete. That is why I like him. Ever since I've known him, he has been a great kind. Yes sir, no sir. That is who he is. And people who talk about how he isn't going to go in the first round, that's BS. There is one team that can't wait to get him.”

Rogers said he met Watson at a Clemson game a few years back.

“Believe it or not, I met him up at Clemson. I went to one of their games. They really thought I was spying on them (laughs). But it was a spring game, and I got to meet him,” Rogers said. “One of my good friends got me to go up there, and I got a chance to meet him. He was humble. And I got to meet him when he was at the first Heisman Trophy presentation when he should have won. He could have won both of them, really. He is just a good kid, and I felt sorry for him. I was like, really? At the end of the day, he is just a good kid.”

He then said that Watson fits the criteria for a Heisman winner.

“No question about it. He does the Habitat for Humanity,” Rogers said. “It's good to be humble, and even though he is a humble kid, he knows he should have gotten the Heisman. He knows it, you know it, and I know it. And he was still humble and shook the guy's hand. I don't know if I could have done that.”

Rogers even said he was pulling for Clemson in the title game against Alabama.