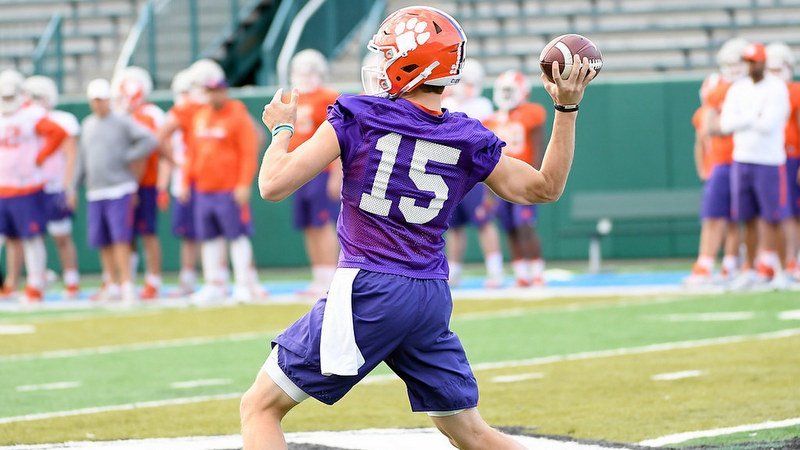 Hunter Johnson throws during practice for the Sugar Bowl

CLEMSON – There are dozens of teams across the country that head into the 2018 season with one quarterback they feel good about. Many more are hoping to find one guy they can depend on. Many teams would consider it a luxury to have two quarterbacks they would trust in a game.

Clemson’s coaches feel like they have four. As much of a luxury as that is, however, only one quarterback can take snaps at a time, while a second quarterback might get snaps in certain packages or when the score gets out of hand.

There is, after all, just one ball to go around. Co-offensive coordinator Jeff Scott smiled brightly last Friday when he was asked if four was too many, saying it never hurts to have depth.

"I like the scenario of having four quarterbacks. I do. I also like having three nine men. I like having three really good backs. How that works out, we'll see,” Scott said. “That's the positives and problems you have whenever you recruit really well, those are good problems to have and as long as coach Swinney, he's upfront with all of our guys. There are no hidden, back-office conversations going on.

“Hey, we've got to compete every single day and everybody's job is on the line every day. The other thing we know is if you work hard and you earn the opportunity to be the best guy, regardless of who you are. How all that shakes out, I know that'll be a big storyline. I know that I've got friends out there coaching and they're not real excited next year about quarterback situations and like I said, we've got four guys that we can win with next fall and we'll see how all that shakes out."

Would the coaches consider a two-quarterback system?

"Man, Y'all are trying to get me on a Friday,” Scott laughed. “I want to go home and watch some Masters Saturday, I'm going to Augusta Sunday and I'm looking forward to that. That is not anything we've even talked about, being honest. That hasn't come up and coach Swinney will be one hundred percent in charge of that and kind of work our way through that when we get there. Just being honest, we have not even talked about that or any of those situations."

Scott said the coaches feel confident with any of the four.

"It is. We've got four guys that can spin it. I think coach Swinney's made the comment and I second the comment. We can win with any four of those guys and I've been here going on 10 years and there are some years you've had 1.5 quarterbacks and you're hoping your starter doesn't get hurt,” Scott said. “And we've been very fortunate we didn't have some injuries at quarterback. This is really the first time that we've had multiple guys, not just depth, but guys who can go out and truly win for you. Just the way they compete with each other, it's a healthy competition.

“One of them goes in there and throws a strike for a touchdown and the next one comes in there and tries to match it. That's really the model of what we want our program to be and for guy's to be focused on being their best and we talk all the time about not being worried about our opponent, we're not measuring ourselves against an opponent, we're measuring ourselves to be the best team we can be and it's the same attitude when they get those guys out there and compete.”