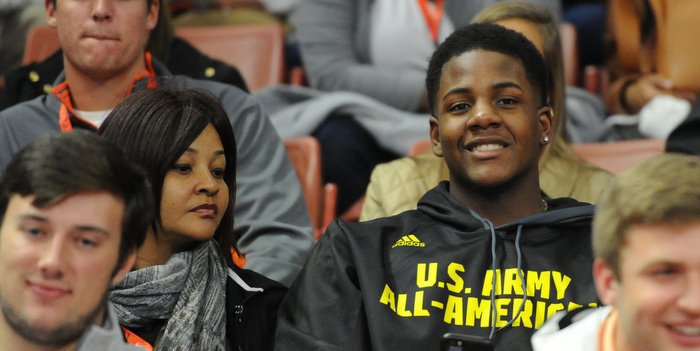 Kelly and his mother take in Clemson's hoops win over Miami

Xavier Kelly’s time may come sooner rather than later.

The 4-star Wichita (KS) East defensive end commit traveled to Clemson this weekend with his mother for his official visit. While on the visit, Kelly met with the Clemson coaching staff and they told him that with the departures of Shaq Lawson and Kevin Dodd to the NFL, his chance at entering the defensive end rotation may come as early as next season.

The 6-4, 257-pound prospect told TigerNet shortly after concluding his visit that the coaches’ message to him was simple – come in ready to work and he’ll have a chance to compete for a spot on the two-deep.

“With those two being gone, that's an opportunity for me to step up and be in the rotation,” Kelly told TigerNet Sunday afternoon. “Just to continue to work hard and be ready to compete for a spot in the rotation next year. The chances of me being in the rotation are looking good right now.”

Kelly’s player host was Clelin Ferrell, and Ferrell echoed those sentiments, saying that hard work before he gets to Clemson will pay off in the long run.

“He was telling me a lot about Clemson. He was basically telling me that I'll love it. He told me to work hard and come ready,” Kelly said. “He just told me different things about Clemson like the academics and some of stuff from a football player's standpoint. We just had a good time.”

Kelly had visited Clemson on a couple of occasions last year, but this was his mother’s first visit. He said they both had a great time partaking in all of the weekend’s activities.

“It was great. I met some new players that I hadn't met the previous times that I've been at Clemson,” he said. “My mom enjoyed it. That was her first time coming to Clemson. She had a great time just meeting all of the coaches and hanging out with all of the players. We also went to the Clemson and Miami basketball game. The basketball team is doing really good this year so that was exciting to watch.”

One of the more impressive aspects of the visits was the fan support at the basketball game.

“I love the Clemson fans. They're so passionate and supportive about their sports. I believe we have the best fans in the nation,” he said. “I love Clemson fans and how they're supportive during the game and even when there isn't a game. Sometimes Clemson players will be out and you'll just see random fans out on the street saying, 'Go Tigers!' I love that about Clemson.”

Included in the visit was taking in the sights and sounds of downtown Greenville, something new for recruits this year as the men’s basketball team is playing home games at the Bon Secours Wellness Arena.

“Greenville is beautiful. We went to the park where they have the waterfall (Falls Park),” he said. “It was beautiful. We ate some great food there. I got to bond with my future teammates and coaches. We just had a good time.”

Kelly’s mother was most impressed with what Clemson has to offer her son away from football.

“She loved it. She loved how the coaches care for me outside of football,” he said. “They want to see me get my degree and be successful after football. She loves how it's a family environment. A lot of coaches from other schools care about just the winning part. At Clemson they care about winning, but they care about doing it the right way. They want the players to be doing the right thing off the field and doing work on the field.”

Excited for the future?????? pic.twitter.com/cmLsIIKNOV