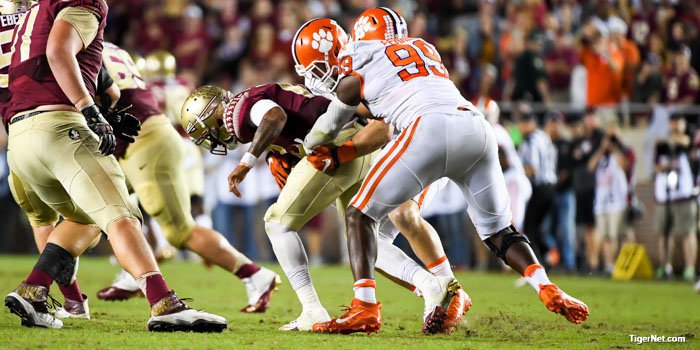 CHARLOTTE, NC - Florida St. quarterback Deondre Francois knows there are two games on the schedule each season that are a little more important than the others, and he knows those two games are going to be more physical than the rest.

The Seminoles topped Miami 20-19 in early October and fell to Clemson 37-34 in late October, but they are two games that Francois will never forget. Both are rivalry games that the Seminoles want to win.

“We view them the same. They are both important. One is not better than the other,” Francois told TigerNet at the ACC Kickoff. “We know when we play Miami we know we have to come ready to play. It's going to be a tough, physical game and they are going to give us their best shot every single game. We already know what time it is with Clemson. They are the defending champions. They have back-to-back national championship trips and we have to bring our A game when we play them, too. We go into both games with the same mindset.”

Francois said the Clemson game won’t be any more important this season just because the Tigers won a title.

“No, it's the same. Whether they would have won or lost,” he said. “We would have approached the game the same way.”

Francois was sacked six times and hit several other times in the loss to Clemson last season, and he had to be helped back to the line of scrimmage on more than one occasion after a vicious hit.

“It was fun. It was just fun. You have to have fun,” he said. “When you say take a beating, I don't look at it as taking a beating. I look at it as playing football. I have to take the bitter with the sweet. If I want to look pretty and throw touchdown passes, then I have to be able to take hits. That's just the love I have for the game.”

Francois said he has earned even more respect for Clemson after watching film of Clemson’s win over Alabama in early January – the Seminoles open with Alabama in a primetime matchup in Atlanta’s new Mercedes Dome.

“I watch a lot of film, and there are a lot of things I can take away from Clemson and what they did against Alabama,” he said. “Alabama's defense is stout and very well-coached. Coach (Jeremy) Pruitt and Coach Saban are good coaches. We just have to come ready to play and pay attention to the little details because I know they will, too.”

However, when he was asked about the best defensive lines he faced last season, Clemson didn’t immediately come to mind despite the six sacks.

“Boston College and No. 7 (Harold Landry) caused a lot of trouble. He is a great athlete,” Francois said. “But that is a hard question. I got sacked a lot, and there were a lot of good defensive lines. N.C. State was pretty good. Louisville. Michigan. Miami's d-line is always real stout. Just everybody in the ACC.”