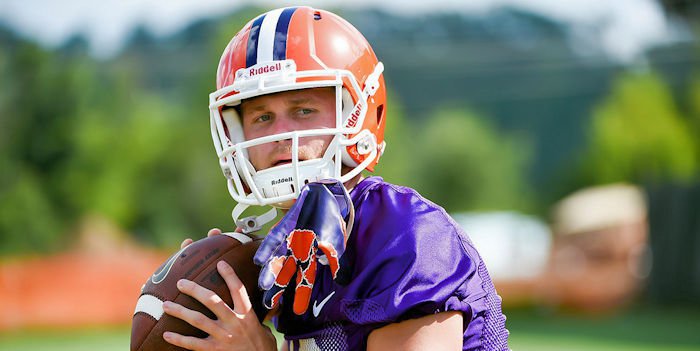 Kelly Bryant is battling Nick Schuessler for the backup spot

CLEMSON – The final scrimmage of fall camp was held Thursday afternoon in Death Valley, and co-offensive coordinator Tony Elliott is liking what he sees heading into the last two weeks before the regular season.

The Tigers scrimmaged for two hours inside the stadium with the only negative coming from uncharacteristic penalties.

“We moved the ball and sustained some good drives, and also scored some points in the red zone,” Elliott said. “There were still too many penalties that we have to clean up. After the guys were off for a day and getting acclimated to class, I thought we did some things that were a little bit uncharacteristic. Overall, pretty good.”

“Overall, those guys have made a lot of plays and caught a lot of balls. Today was a day that we could get a lot of guys some work because this is the last scrimmage.”

On what he needs to see from the offensive line

“Just being able to run the ball consistently. That is something we have been harping on, and it was great to see the good work up front. Guys are targeting well, and we were able to run the ball. We weren't quite as consistent in our protection, and we gave up what would have potentially been shots on the quarterback. We will get that cleaned up, but overall I was pleased with the running game and the chemistry is coming along.” 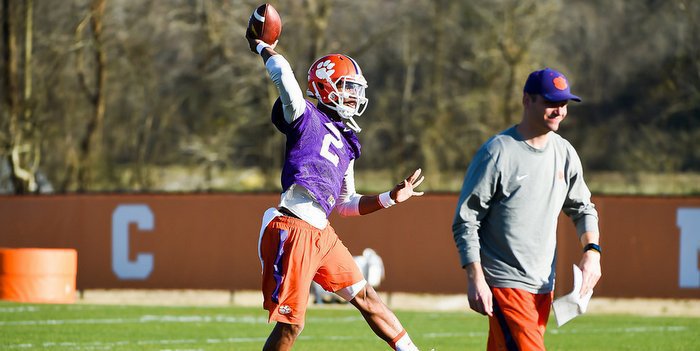 Kelly Bryant is battling Nick Schuessler for the backup spot "

“He's really been challenged. Early in camp he was running the football like he didn't want to get hit, and now you're seeing him being aggressive. One of things we pride ourselves on in our room is accelerating to contact. That is something he had to learn. He's always been a guy that's faster than everybody and he can run around a lot of blocks. Sometimes you don't have to set up blocks because you can out run everybody, but he learned really quickly at this level - he broke one and he got run down because he didn't use proper technique. He thought he would run away from everybody. But over the last few practices he's starting to hit the hole with confidence and he's running with confidence.”

“He did well. It was more situational, but he did pop a good run down in the red zone, and he's starting to feel comfortable running the ball. He wants to in pass protection, but he needs the muscle memory to get that fit. It's just that confidence.”

“I thought Nick (Schuessler) did a good job of managing situations and he led a two-minute drive down for a touchdown. Kelly (Bryant) continues to make progress. You are starting to see more snap decisions and getting the ball in the right spot. He's throwing the ball with more accuracy. I thought they did really well, but we'll look at the tape and go from there.”

“He got in there. He didn't have as many reps as Kelly and Nick, but he looked fine. He still has to understand the complete system. We do a lot of things that are on the quarterback - managing the motions and those things and just being consistent. In terms of his moxie, he has a moxie to him. As camp goes along, though, the installation is all starting to pile on him a little bit.”

“The days that Jay was out in camp helped Falcinelli. He just hasn't been in there to get confident. But he had some chances to challenge himself in the running game and now he's starting to make calls.”

“We feel like we have some of the best candidates back there in the country with Artavis (Scott) and Ray-Ray McCloud and Hunter Renfrow. We got a chance to work on that today and we will go look at the film. All of those guys look confident catching the ball. Any of those three guys can do it, but the challenge for us is to help those guys up front and challenge the front line. My guys in particular - getting my running backs on punt return and helping. Every player has to take ownership. If we can do our job up front we have some of the most dynamic guys in the country.