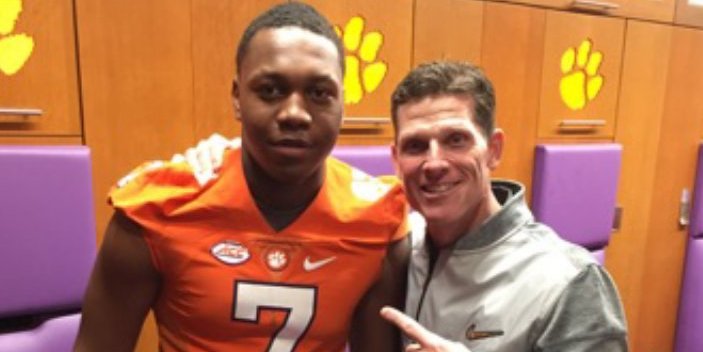 One of the nation’s top defensive end prospects for the 2018 recruiting cycle committed to his dream school Friday evening.

Shortly after his call to Venables, Mascoll told TigerNet the decision was the right one at the right time.

“Really, a long thought process. A lot of prayers with my family. It was the right time,” Mascoll said. “I just felt like Clemson was the right fit for me. I really had grown to love Clemson since the eighth grade. They made the offer in the eighth grade and the fact that they've always been there. Ever since they made the offer, I became a huge Clemson fan and that's always been my dream school. I love what they're doing there. I'm very excited and I've always been excited about Clemson. I love the feel there.”

Mascoll said a recent trip to campus cemented his decision.

“I was there two weeks ago. I felt like I was really missing the feeling that I was always having,” he said. “I wanted to take a visit up there and see how I was feeling afterward and as soon as I got on campus, I felt great. It felt like home. I knew it was the place for me. On most other visits, I go to sleep on the ride back, but I was excited after the Clemson visit. I was up the whole ride and my dad was like, 'Dang. This is crazy. Why are you up? You're usually asleep.' I was like, 'I'm excited,' and I told him, 'Dad, this is where I want to be.' That was two weeks before my commitment and I just felt like it was right for me.”

One of the most important things Mascoll did on his visit was sit down with new defensive line coach Todd Bates.

Once he knew for sure, he made the call to his future defensive coordinator.

“I called Coach Venables to let him know and he was so fired up,” Mascoll said. “Then, I gave Dabo a call. I told Dabo that it was a wrap. It was a done deal.”

“Definitely the feel there and the trust that I have for the coaches. I feel comfortable there,” Mascoll said. “I definitely know they will take care of me up there. There's just a feel that's different. I love their accountability there. It's mostly the trust and the trust I have for the coaches and the people there being around the community, it's what put Clemson over the top for me.”

Mascoll has offers from most of the nation’s top programs, but he says his recruiting days are over.

“This is it. I'm definitely one of those people that once I commit to something and put my mind to it, I'll stay committed to it. I'm fully committed, 100-percent," he said.

I am blessed ?? and honored to say i am officially committed to the University of clemson ??????? #ALLIN pic.twitter.com/ETfGIsLP0g