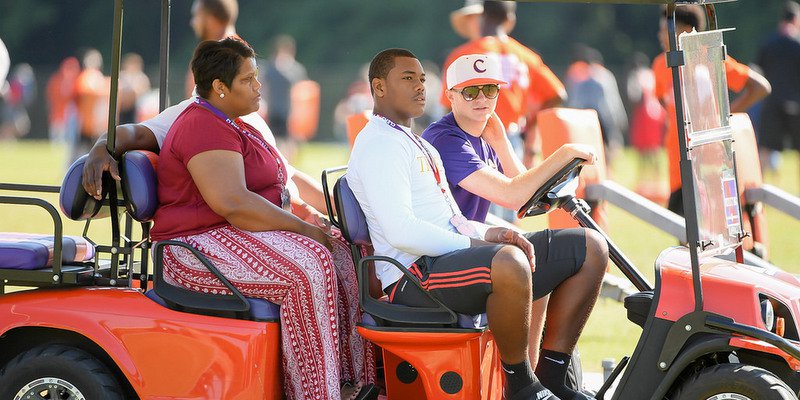 With offers from Alabama, Clemson, Florida State, Georgia and LSU, Travon Walker is well on his way to being one of the biggest names in the 2019 class.

The 4-star Thomaston (GA) Upson-Lee defensive end has 10 offers in all and made a much-anticipated trip to Clemson for the first session of Dabo Swinney’s high school.

Walker told TigerNet earlier this week that spending time with the defensive coaches and getting to know members of Clemson’s defensive line were the highlight of his visit.

“It went great. Being able to sit down with the d-line coach (Todd Bates) and the defensive coordinator (Brent Venables) and the whole starting d-line was very special to me,” Walker told TigerNet. “I loved it.”

The 6-5, 254-pound lineman spent a lot of time around Bates, and it was the work ethic of Clemson’s new defensive line coach that stood out.

“I did and he is a very cool coach and person to be around and pushes you to do your best,” Walker said.

Clemson could lose Austin Bryant, Christian Wilkins, Clelin Ferrell, Dexter Lawrence and several others over the next two years, so coming to Clemson could mean early playing time for Walker.

“They were telling me that I can have a very bright future at Clemson and that by the time I come in that most of the d-line would be leaving so I would have a chance to come in and compete for a spot,” Walker said. “They said that nothing was going to just be handed to me and that they aren't going to pressure me into all of this recruiting.”

There’s a lot of time before Walker has to make a decision, but Clemson made a case to at least stay in the conversation for the duration.

“I will be honest with you, Clemson did make a very impressive visit for me and to be honest right now I really can't say where they stand cause my recruiting is really just getting started but they could be high,” Walker said.

As a sophomore, he registered 70 tackles, five sacks, and four forced fumbles.