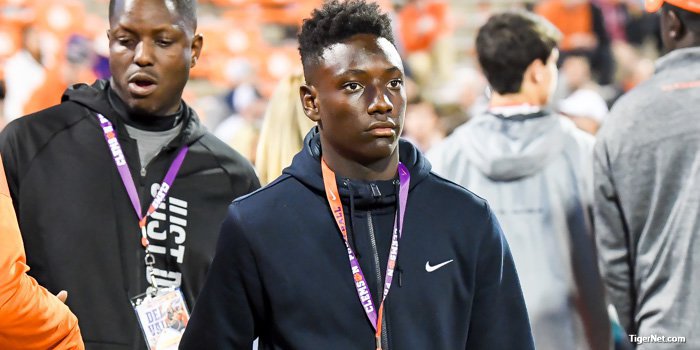 The recruiting process can be long and difficult for any star recruit, so after three years Verone McKinley’s recruitment is finally coming to a close.

The 4-star Carrollton (TX) Hebron cornerback has endured three years of recruiting materials, coach’s visits and unrelenting calls from the media, and while he’s enjoyed the process, he’s ready to make a final decision and focus on his senior season of high school.

McKinley told TigerNet Thursday afternoon that he’ll have a decision by the end of the month.

“I don't have a date, but I know it will be in the month of May,” McKinley told TigerNet. “I have kind of an idea of a few places, but I'm still taking a deeper look. I just feel like it's time. I've been in this process for three years since it started early in my freshman year. I just feel like it's time and I want to get ready for the season and go win a state championship.”

Despite the distance of nearly 1,000 miles, Clemson is still very much under consideration along with Oklahoma, LSU, Alabama, UCLA, and Texas A&M.

“I would consider them in the final aspect of my recruitment, definitely,” McKinley said. “They were in my top five, and I haven't counted anybody out yet. I'm still looking deeply at Clemson regardless of how far it is.“

Clemson’s knack for putting players in the NFL and the opportunity to receive a top-notch education have kept the Tigers at the forefront of McKinley’s mind.

“It definitely means something to me,” he said. “It's one of my goals in life. I know they have a good communications program, so I understand that outside of football that I'll get a good degree, but I look at Coach Reed's success with putting guys in the NFL.”

McKinley said he hopes corner’s coach Mike Reed makes it to Texas, so he can continue building what is already a strong relationship.

“Coach Reed hasn't visited me yet,” he said. “He said he'd be out here this spring, but he hasn't come out here yet. I talked to him last week. He said he was making his rounds and was in Georgia and Florida, but that he would make it out here to Texas.

“I have a good relationship. Being that Clemson is so far away, he (Reed) said he wants to make sure it feels like home for me. He said he doesn't want me crying or being homesick and wanting to go back home. He said he knew that I wouldn't have a lot of family there, so he's trying to present the family aspect of Clemson.”

McKinley said he relishes every opportunity to be put on an island and play one-on-one against a team’s best wide out.

“As a corner, I definitely like being on an island,” he said. “I'm a versatile corner, so I can play man or zone. I will put myself in a situation to be successful regardless.”