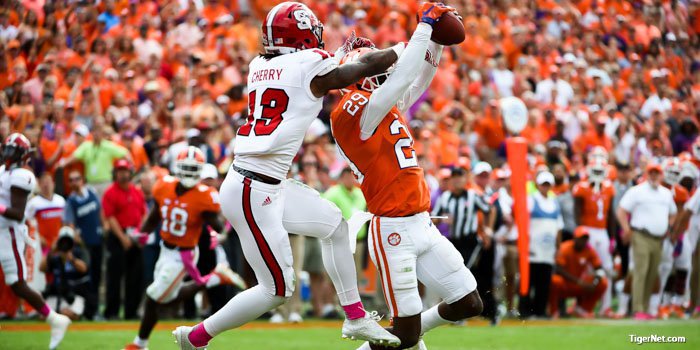 Edmond ends the game with this interception, the first of his career

CLEMSON – Marcus Edmond wound up in what he calls a life-threatening situation after he saved Clemson’s football life with an overtime interception Saturday.

Edmond intercepted NC State quarterback Ryan Finley on the Wolfpack’s first play of overtime Saturday, preserving third-ranked Clemson’s 24-17 victory over NC State on Homecoming Saturday. It was the second game-saving play in as many home games for the redshirt junior – he stopped Louisville wide receiver James Quick on fourth down two weeks ago, saving Clemson’s ACC Atlantic chances in a thrilling victory.

Saturday was more of the same – following Clemson’s touchdown to start overtime, Finley looked over the top for wide receiver Bra’lon Cherry, but Edmond was there to make the game-ending grab, and he told TigerNet the defense made big plays all afternoon.

“It was up close, and I broke on it, and that was that,” Edmond said after the game. “It came down to defense the whole game because the offense had some slow starts and turnovers here and there. The defense kept us in the game, and it came down to the defense at the end of the day. We stepped up.”

Edmond found himself at the bottom of the dog pile as Clemson’s players rushed the field, and seconds after breathing new life into Clemson’s season, Edmond couldn’t catch his own breath.

“You try to keep level the whole game. It's just another play. I just happened to make the play today,” he said. “I take it one play at a time. After I caught it, I kind of blacked out. I almost died (under the pile). For real, I almost died. Everybody kept piling on me, and I couldn't breathe. Me and Ben (Boulware) were under there and we were saying we couldn't breathe and everybody just kept piling on.”

“Ol' wiry Marcus, he's made some huge plays. I'm so proud of him,” Venables said. “What a magnificent play. An incredible play. He just imposed his will on that play and maintained his leverage through the route inside and cut the post off and just sheer will to come down with the ball.

“He's very instinctual. He's a football player. He was a skill guy in high school and did a lot of good things as a quarterback and DB, but he's pretty natural around the ball. His instincts really showed up today and on that play in particular. What an incredible play.”

As we noted two weeks ago, Edmond was a scout team wide receiver this time last season, and he said other players might have transferred.

He preferred to remain patient.

“We just keep that same 'Best is Standard' mentality, even when adversity hits. We are still going to play hard, one play at a time and just keep persevering,” Edmond said. “For me, it just came down to patience. Anybody in my position would have transferred. But I stuck with it.”

“It's a lesson to all of us. Some of it happens at different times. What I love about Marcus is a year ago, he's running scout team receiver for us and never got bitter about it,” Venables said. “He didn't think he was getting screwed over. He was the best version of himself he could be every day. He was a complete and total team guy and then he was ready for his opportunity.

“Coach (Mike) Reed has gotten him ready and Coach (Dabo) Swinney, the same thing, has continued to promote him. Two incredible plays. For him, Marcus has ice in his veins. He never changes his facial expressions. He's the same guy every day. Most of that is good, and maybe that's why it has taken him a little bit for him to get to this point. He never panics whether the ball is in the air or he's facing adversity in his career here. All he has done is kept working. I think it's a great lesson for all of us players and coaches, both.”