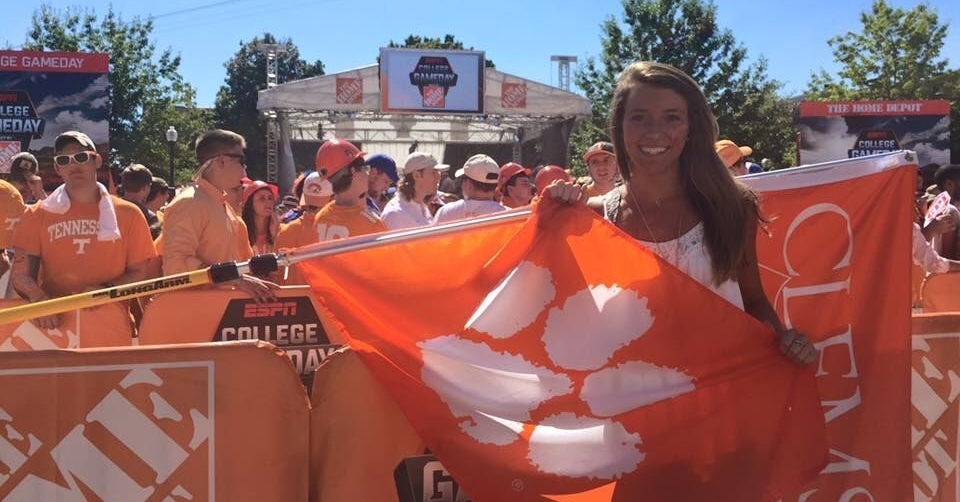 CLEMSON – We were on our way to Clemson’s game against North Carolina when my phone vibrated with a text. My good friend Kory Black was beginning to panic because he didn’t see the Clemson flag somewhere in the crowd on College GameDay.

Never fear, Kory, the flag was there and will celebrate a milestone this weekend.

The first text sounded the alarm: “A bit nervous. The Clemson flag is missing from GameDay. I saw a Gamecock flag but not the Clemson flag.”

Then, a few minutes later, “False alarm! Found it! Whew.”

Washington State has the longest current streak of having a flag presence of ESPN’s College GameDay show, celebrating 230 consecutive shows that “Ol’ Crimson” has been seen. Clemson’s iconic Tiger Paw and Alumni flag will celebrate a milestone this week – 100 consecutive shows where the flag is in attendance.

“The goal was never to unseat the streak that Washington State’s ‘Ol’ Crimson’ has amassed, but rather a fun way to remind folks that the Clemson Alumni Association is your lifelong connection back to Clemson and that it is welcoming to all of Clemson’s alumni, students, parents, fans, and friends,” said Bubba Britton, who is the Director of Philanthropic Initiatives for the Clemson Alumni Association. “Wherever you may be, there is sure to be other members of the Clemson Family and a high likelihood that there is a Clemson Club in your area.”

The first game for the Clemson flag was the Clemson vs. Georgia home game back on August 31st, 2013. The flag was flown by an anonymous student as the Alumni Association put out a number of signs to student volunteers and one chose the flag.

According to Britton, the first few games only featured a single-sided “Clemson Alumni” flag. Based on suggestions regarding the flag at times reading backward depending on the wind direction and the love of the simple but perfect Paw, a couple of changes were made. Soon the Alumni flag was changed to a double-sided flag to insure it read properly regardless of which direction it was waved and that a Paw Flag was added to be flown with the Alumni flag.

During the 2017 season and again this year, a National Championship flag has been included and waved.

How is a person chose to fly the flag?

“In somewhat of a surprise, often the most difficult locations to find a flag flyer have been those closest to Clemson,” Britton said. “Especially if Clemson has a home game. Places like Athens, Georgia, or Columbia, South Carolina, have been difficult because many folks that live in those areas have plans to drive to Clemson for Clemson’s game!”

“So how do we identify folks? On Sunday morning, Megan McDow will run a query for areas in an approximate 100-mile radius of where GameDay will be. She then sends an email that has a form to fill out if interested. This response comes to me (Bubba Britton) who makes contact with the volunteer to let them know what all flying the flags entails and to insure they are “All In.” Once that is the case, flags are shipped, but the volunteer has to purchase the flagpole.”

As the flags arrive, Alumni Association Director of Marketing Dana Morgan is put in contact with the flag-wavers so that the volunteers can send pictures to her and give background on the wavers to promote on the Alumni Association social media channels.

Those who are chosen to fly the flag get to keep the flag as a token of appreciation for showing up and spreading the word about Clemson.

An interesting note: Clemson is 81-9 since the flag started flying on GameDay. Next year, the initial College GameDay show will be broadcast from Ireland, where Notre Dame and Navy will play a Week 0 game.