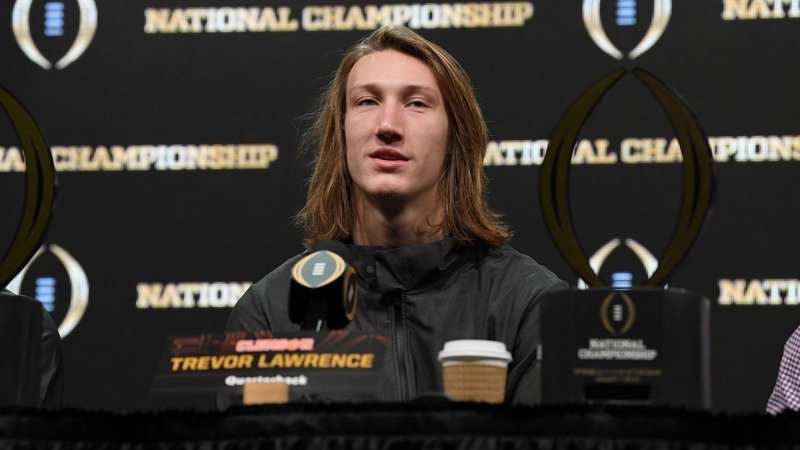 Trevor Lawrence took the college football world by storm last season and expectations are through the roof in 2019. Wherever there is talk of Lawrence, comparisons to current and former quarterbacks pop up, but one college football analyst thinks Lawrence is in a league of his own.

Lawrence put together a stellar freshman campaign. Lawrence won the starting position four games in the season and proceeded to throw for 3,280 yards and 30 touchdowns to just four interceptions. He completed 65.2 percent of his passes and had an overall QB rating of 157.6.

“I see a young player that is very risk-averse in the sense that he can make all the throws, he can do all the things that you need the quarterback to do but he’s not going to hurt your football team with stupid, risky mistakes,” Luginbill told TigerNet. “I think he has a great balance of saying, ‘okay, I can fit this ball in there but I’m better off going through my progression,’ and that’s tough for young players to do because they get confident, they have a little success early on and the next thing you know you’re taking every risk in the room because you feel like you can get away with it. I think the other thing that stands out is he’s very aware of the people around him.

“He doesn’t have to wear an ‘S’ on his chest. When he walks into that huddle and he looks in both directions and there are first-round draft choices to the right, to the left and behind. I think he has an understanding of when to push the envelope while realizing he doesn’t have to. He just gets the ball into the hands of the playmakers and the rest will take care of itself.”

One throw from last season stands out – the throw on third down against Alabama in the National Championship game.

“The one throw that he made on the deep in-cut in the national championship game against Alabama where he had a rush just barreling down on him,” Luginbill said. “I think the hardest thing for quarterbacks - young or old - is to keep your eyes downfield under duress. You know it’s coming, it might be coming low but you stand in there anyway and you deliver the ball. For a younger player, extremely rare but he was doing it at moments when the offense needed it the most, so I think that stood out.

“Secondly, if you watch the first few series of the national championship game, there was an opportunity there where it was really wobbly, when we said, okay are we finally going to see a moment where he’s going to be a freshman? He didn’t do it. To me, that more than anything else kind of defines what the guy is.”

When asked if Lawrence compares to any current of former quarterbacks – many compare him to Colts’ starter Andrew Luck – Luginbill said there really isn’t a comparison for Lawrence unless it’s Eagles’ great Randall Cunningham.

“What people don’t know if they don’t really know him is how good of an athlete he is. They don’t realize how good of a runner he is because it hasn’t had to be showcased,” Luginbill said. “He is a really gifted runner, so when I’m trying to do a comparison, I don’t want to make a comparison to a passer. He’s a better runner and I think he has a much stronger arm than Andrew Luck. He’s got a lot of similar traits to Randall Cunningham.

“I’m going way back but you see that whip-like, powerful release and the ball just jumps off his hand. He’s got the long levers. He’s got a long stride. He’s just unique because you look at him and you say, okay well he’s a runner but he’s a passer He can kind of do both. I don’t know if there is a comparison for him right now, to be honest with you. I actually wouldn’t say Andrew Luck. I think they’re very different”