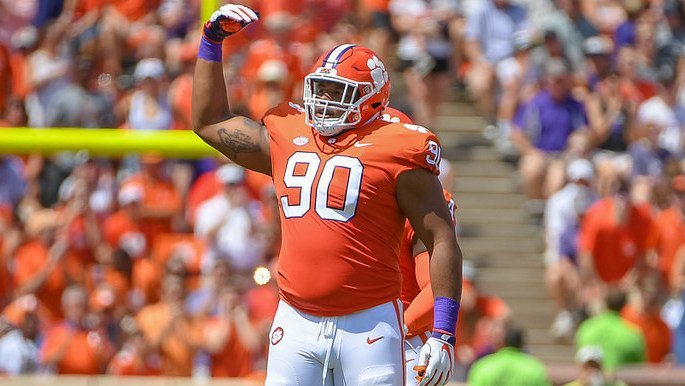 Lawrence is tired of playing against the option

Lawrence missed time last season with a foot injury and didn’t participate in contact sessions during the spring after surgery corrected the issue. When game day arrives, Twitter, Facebook and all other forms of communication erupt when Lawrence takes a play off and heads to the sidelines.

Is Dexter Ok? Did Big Dex get injured? I haven’t seen Dexter in for three plays, is he ok?

He’s not only healthy, but he’s also thriving.

"I just feel good, honestly. I'm just taking care of my body day in and day out,” Lawrence told the media this week. “That's the kind of thing that I focus on most right now. Just so that I don't get back to feeling like I didn't take advantage of everything to stay healthy. But, I'm feeling good right now.”

Lawrence is ready to move on.

“That was a tough little stretch right there, but now it's time to open up and play a couple of spread teams and getting out of that frog stance,” he said with a smile.

Next up for the Tigers is Syracuse, a team that upset Clemson 27-24 in Syracuse a year ago.

"I wouldn't say that it's a revenge game. They just beat us last year. They came ready,” Lawrence said. “We're just kind of focusing on our next goal which is to win this week. I wouldn't say revenge, I would just say that we're focused. It's no different than last week's game preparation wise - just getting the gameplan down and executing it.

"We didn't show up (last year). They beat us. They out-played us. They out-coached us. We have to do everything we can to not let that happen again. Our focus and mindset wasn't right. I don't really have an excuse for it. They beat us fair and square, they scored more points than we did. That's kind of how you gotta look at it."

Lawrence said that Cuse quarterback Eric Dungey is a playmaker that runs the Orange’s up-tempo offense.

"I like him. He's a tough guy. Great attitude. He's got a lot of confidence in himself which is what you like to see. So, I really like him. Just playing against him last year as well, I really like his attitude,” Lawrence said. “In practice, we stress ourselves. Coach Venables pushes us - oh my goodness, he probably goes faster than them honestly. Coach V just kind of stresses us each and every day. He'll probably stress us today during practice - going high tempo and getting the call from the sideline. We're gonna get stressed."