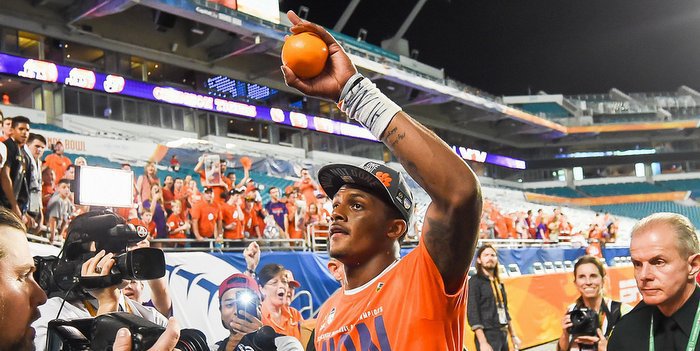 CLEMSON – Deshaun Watson can’t walk out of the WestZone without a fan or a group of fans grabbing him to take a picture or talk football, and it’s hard for the Gainesville native to walk around campus without being recognized. Interview requests are plentiful, and after having graced the cover of Sports Illustrated and ESPN the Magazine this past season, he’s a known quantity wherever he goes.

Go out to eat? Can’t do it without drawing a crowd. Take his girlfriend out on a date? Hard to accomplish at Clemson, so he has to go home and surround himself with family, a friendly barrier to an outside world that can sometimes love a player a little too much.

But he hasn’t changed. Not one bit. It’s not in his DNA, and he told the media following Wednesday’s practice that he won’t change, no matter how much attention he receives and no matter what the future holds, whether it’s the NFL or another year with the Tigers.

“Life is changing, of course. The way people treat me and look at me is really changing, but the inside of myself is not,” Watson said. “I'm still going to be Deshaun Watson no matter how much attention I get or how much I don't. Whatever happens next year is gonna happen. But, at the time being, I'm going to enjoy my time here and be a Clemson Tiger and just have fun with it.”

The only thing that’s changed? His goals.

“I always set new goals for myself, for this team and for this offense,” he said. “I always strive to be the best ever, and that's what I'm planning on doing - to be the best. At the end of the day, if you take care of the wins on Saturday's, everything will take care of itself. I'm just trying to be a better overall player, leader, and quarterback. I'm trying to get better with the fundamentals of the game and the technique of the quarterback position. There is always something where I can better my game and that is what I'm trying to do.”

Clemson’s offense finished 11th nationally in total offense and 16th in scoring offense as Watson made a run at the Heisman Trophy and the Tigers made a run at a National Championship. Watson says the Tigers can be even better in 2016.

“Of course, we can be better. We can eliminate the sacks, the turnovers, and the penalties. We can capitalize on more plays,” Watson said. “Our receivers can catch more balls - I can hit more receivers. In the route running, Wayne and I can break and find better holes. There is always something that we can get better at. We aren't a perfect team, but that's what we're trying to be. It takes everyone being on the same page and doing the same thing.

“Teams made good plays, but it's something that we can learn from. It was everyone on the offense and coaching that had a play in that. We're going to be fine. We have a lot of skills, and we're very smart. A lot of guys have played before, and a lot of guys are motivated and competitive.”

The main goal, however, is to win that elusive national title, and Watson - the team leader - is making sure the team is focused on that goal.

“We took a week and a half break and then work-outs started back. I mean, it's always going to be in the back of my mind because we're so close, and I thought we were the better team, but short on time and plays, at the end of the day you have to move on and try to accomplish it this year,” Watson said. “It stings every time you think about it. Being so close to winning the National Championship, but you have to move on from it and learn from it. We are going to get better from it. We watched the game film a couple of times and tried to correct the mistakes. We've experienced that, and now that we know how it feels to lose, we want to be on the winning side.

“It's hard. It's a new team - a new year. You have to go ten times harder than the year before to get back there and especially with what we brought to the table last year and everyone respected us from what we brought to the National Championship. All eyes are going to be on us and what we can do. But, if we just focus on us and take care of our game and not get distracted, I think we can be up for the challenge again. Each and every day counts. Every rep and everything you do counts. The way you go into class, the way you eat, the way you work-out, the way you watch film. It's the little things - every little thing that you do matters going into the season. We only have nine months. I know you've heard Coach Swinney say, ‘nine months before we get the results.’”

The Clemson offense will have plenty of talented playmakers on the field this season, but Watson says there won’t be an issue with egos or playing time.

“That's the thing about our offense, we're not selfish. It doesn't matter who makes the plays; everyone is going to celebrate with each other and make sure we motivate each other,” he said. “Whoever has the ball is going to be able to make the plays at each position, even the guys that aren't starting can make plays like Tre (Trevion Thompson), Ray-Ray (McCloud), and Deon (Cain). I bet some of the freshmen coming in that will be competing in the fall camp will be able to make plays, so it's going to be really fun and interesting.”