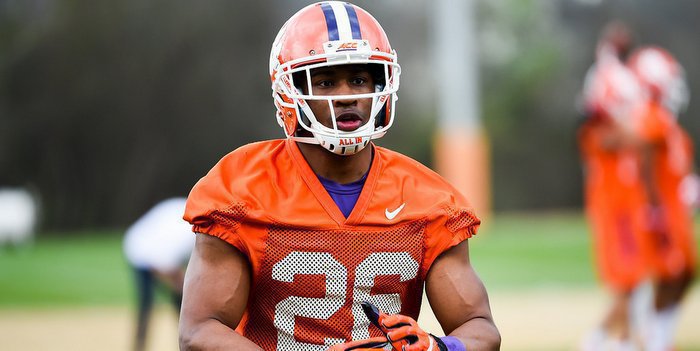 Choice at a recent spring practice

A terrifying moment in Adam Choice’s recovery from a torn ACL occurred almost two years ago during August practice. He went to make a cut, felt his knee buckle, and collapsed to the ground on the practice field. A quick examination showed the knee was still structurally sound, but mental roadblocks are sometimes tougher to overcome than the physical ones.

As spring practice hits the midway point, Choice is battling C.J. Fuller and Tavien Feaster for the starting spot at running back, and for the first time since his knee injury, he feels like both of those battles have been won.

“It was me trying to find my way back. I was pressing too hard, and it probably cost me more than helped me,” Choice said. “I’ve just got to simplify things again and get back to what I know and do what I do.”

Choice tore his ACL against Boston College in mid-October of 2014. At the time, he had moved into a starting role and led the Tigers in rushing. His injury opened the door for Wayne Gallman, who held onto the job for the next two seasons.

After the injury scare in 2015, the coaches elected to redshirt Choice, and he came back last season to collect 45 rushes for 158 yards, a 3.51 yards per carry average.

He knows he can do better.

Choice at a recent spring practice "

“In my eyes, I haven’t played up to my standard here lately, and its kind of been frustrating,” Choice said after a recent spring practice. “I’ve just been trying to simplify things and getting back to doing what I do. It’s coming along slowly. I’m starting to feel more confident in my cuts and stuff like that. It’s a work in progress. Hopefully it’ll come along sooner than later.”

Co-offensive coordinator Tony Elliott says Choice has shined this spring, something he attributes to confidence.

"I don't know if you'd say healthier, but a new sense of confidence of where he's moving. We got to remember he was the guy that could've potentially gotten the nod back in freshman year before he got hurt, so what you're seeing is just that level of confidence that he came in with,” Elliott said. “Choice is a very conscientious guy and pass protection is something that he's really ,really had to improve upon but you see he's not thinking about it and he's being physical so I like the way he's been moving.

"Hopefully all those guys have an opportunity to contribute and it'll be up to them. Just like going into it before Wayne (Gallman) came being the alpha guy. He took it upon himself to separate himself. I think Choice has the potential to separate from the pack just like Fuller and Feaster do. It'll be on them; they've got to be consistent."

Choice knows what it takes to earn the top spot – he battled and won the job in 2014. Now he has to do it again.

“I know I can do it. I know it can be done,” Choice said. “It gives me a guideline. It’s stiff competition. We’ve got some great guys ready to go play. It’s tough, but it can be done.”