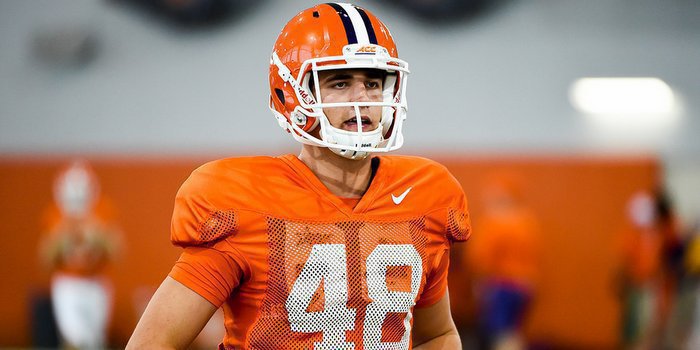 Spiers will compete for a starting job in the spring

Clemson head coach Dabo Swinney told the media last week that 84 of 85 scholarships have been used heading into the spring, and the last scholarship awaits the winner of the competition to be the starting punter.

Will Spiers wants that scholarship.

Spiers walked on to the Clemson football team last fall and hoped to earn a spot heading into the 2016 season, but veteran punter Andy Teasdall held onto the starting job and Spiers redshirted. Teasdall has moved on, and Spiers will get a long look at punter this spring.

He knows it won’t be easy, but he says it’s something he wants.

“I've just got to continue to work hard and improving every day punting,” Spiers told TigerNet during bowl practice. “I just have to keep going out there working my best to win the job. It all comes down to the fact that I want to win the job and be the man next year so I have to keep working hard.”

Of course, the name Spiers and punting has a history at Clemson. Will’s father is current Clemson coach Bill Spiers, who played baseball and moonlighted as a punter during his time as a Clemson student.

During his junior season at Clemson, Bill answered an ad in the school newspaper, which had been placed by then-head football Coach Danny Ford. The Tigers were in need of a punter and Bill tried out. He made the team and became starting punter for the Tigers in 1986. That season Bill, who Danny Ford always referred to as “Shortstop,” would play in the Gator Bowl. Bill’s 39.2 average ranks 12th all-time at Clemson.

On the diamond, Spiers was a first round draft pick (13th overall) in the 1987 amateur draft. He debuted in the majors two years later with the Milwaukee Brewers on April 7, 1989 and played until 2001 for three major league teams – the Brewers, Mets and Astros. He wound up with a .271 lifetime average with 37 homers and 388 runs batted in.

“It would be awesome to follow in his footsteps. I always wanted to like my dad when I was a little kid,” Will said. “I wanted to play baseball, but now I'm playing football and it's been pretty cool This is an awesome experience being here and on this team.”

The younger Spiers says he doesn’t mind having his father around – Bill is back in school to finish his degree and has been helping with the football team.

“It's been pretty cool, actually,” Spiers said. “At first, I was little not nervous, but concerned about it, but it's been perfectly fine. It's been great having him up here. It really has been a good thing. If I need something I can always call them and they'll be there for me.”

In the meantime, Spiers says he will keep working and trying to improve his distance and hangtime numbers.

“Honestly, I don't know the exact numbers, but if I had to guess I'd say I’ve been averaging around 40 yards per kick,” he said. “I'm not really sure about my hangtime. But I want to win the job, and I think I can win it. It comes with work and I've got to keep working at it to get that distance down.”