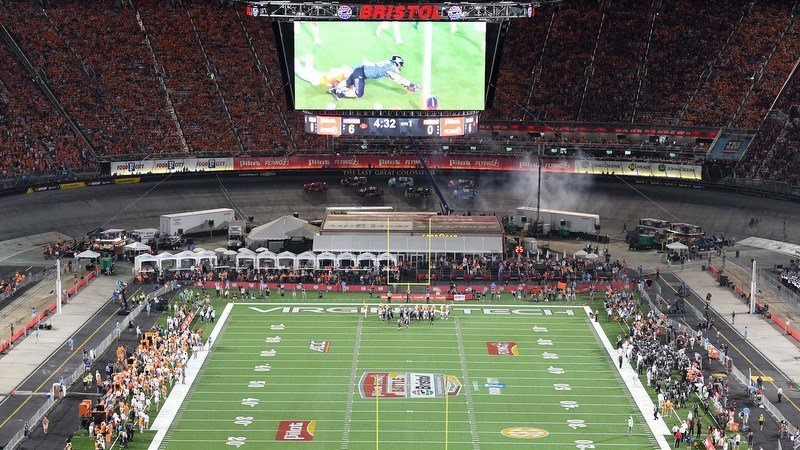 Virginia Tech and Tennessee played at Bristol in 2016 (Photo by Christopher Hanewinkel, USAT)

CLEMSON – There might one day be another college football game held at Bristol Motor Speedway, but don’t expect Clemson to be one of the teams.

On Monday, Bristol Motor Speedway executive vice president Jerry Caldwell told Jeff Birchfield of the Johnson City Press that football would return to the world-famous NASCAR facility, though no date or matchup has been identified at this time.

Tennessee and Virginia Tech played in a highly-anticipated matchup there in 2016. The Volunteers defeated the Hokies 45-24 in front of a record college football crowd of 156,990.

Message board rumors began to flow out that Clemson had been mentioned as one of the teams for the next game, with Tennessee the most-mentioned opponent. Bristol is just 115 or so miles from Knoxville and about 170 miles from Clemson. The two programs haven’t met on the football field since Clemson defeated Tennessee 27-14 in the 2004 Peach Bowl. Before that, the teams hadn’t met since 1976.

Clemson Director of Athletics Dan Radakovich told TigerNet Wednesday that he has been contacted about a potential matchup.

“The folks that pulled that together have talked to us about that. I think it's intriguing but I am not sure we have space in our schedule to be able to make that happen,” Radakovich said. “And we've let them know that. The first one they had between Virginia Tech and Tennessee, because of the locations of the two schools and where Bristol is, was really kind of made for that spot. It was also in the works for over a decade, I think. But with our upcoming football schedules the way they've been set, that wouldn’t be something we would look to do.”

That doesn’t mean that Radakovich isn’t out trying to find meaningful games to schedule.

“I think we are good through 2024. We like to get into the home-and-home series with schools,” Radakovich said. “We have a few out there that we are continuing to say, 'Hey, let's play.' Oklahoma has said that would be good, but we can't play them until the 2030's. It's kind of funny to do football schedules.

“I know we've had discussions with Oklahoma but that is way out in the future. They are the ones we have had the most conversations with, just because we've seen each other, me and (Oklahoma AD) Joe Castiglione, just because we've seen each other. But outside of that, we are still hunting and pecking with the other schools to be able to get that done.”

In 2023, Clemson hosts Wofford, Florida Atlantic, and Notre Dame and plays at South Carolina. For 2024, only The Citadel and South Carolina have been confirmed.