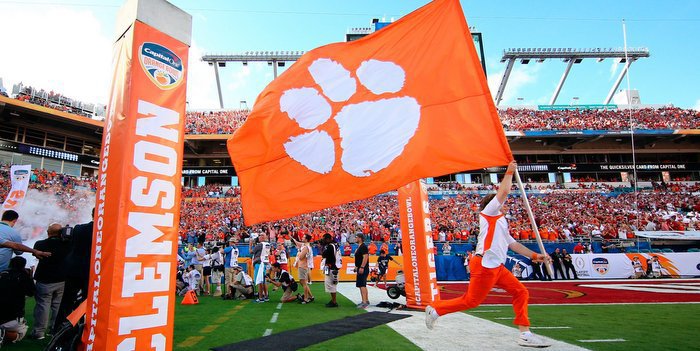 Flying a Clemson flag might earn you a visit from head coach Dabo Swinney (Photo by Steve Mitchell, USA Today)

CLEMSON – Think that no one notices when you fly the Clemson flag outside of your house? Think again. You never know when head coach Dabo Swinney will drop by for a visit, even if you are wearing your pajamas.

Clemson signed another top ten recruiting class last week, a class that included 5-star linebacker Tre Lamar out of Roswell, Ga. Lamar committed to Clemson last July and enrolled at Clemson in early January so he could take part in the Tigers’ spring practice.

During last year’s recruiting press conference Swinney recounted how he fed grapes to a pig names Jules while on a recruiting visit, and he was asked last Wednesday whether he had any special stories to recount of life on the recruiting trail. He did, and it involved a visit to Lamar’s new house last fall.

“I have lots of great stories. Probably the best story was going down to Tre Lamar's house,” Swinney said last Wednesday. “He had just moved into a new home and had only been there a couple of weeks in this new neighborhood. We were trying to find the house, and there was a house that was flying the Clemson flag outside the house. I was like, 'Oh, this has to be them right here.' But it wasn't. He was the house next door. I was like, 'Dadgummit, he's got a neighbor with a Clemson flag. That's pretty good.'”

Swinney and the coaches visited with Lamar and his family, but Clemson’s head coach was interested in meeting the neighbors who so boldly flew a Clemson flag in Georgia territory.

“So we go in the house, and we have a great visit,” Swinney said. “And I was like, 'Who are these people next door?' They had already met them, and they said they were huge Clemson fans, and I said, 'Let's go over and knock on the door.' So it was 7:30 or whatever, and we go over and knock on the door, and they were in their pajamas. It was a husband and wife and a little girl, and I was like, 'What's happening!'”

The story simply adds to the lore of Swinney, but it also illustrates that you never know who might come knocking. Swinney said he simply wanted to thank them for being Clemson fans but wound up getting the best end of the deal.

“So you never know who is going to knock on your door. I wanted to thank them for flying the Clemson flag,” Swinney said. “So we went in the house and proceeded to get a tour through the entire house and every Clemson artifact that was in the house and how it got there. We had a great time meeting a couple of really nice folks. A couple of graduates from Clemson. That was really neat spending time with them.”