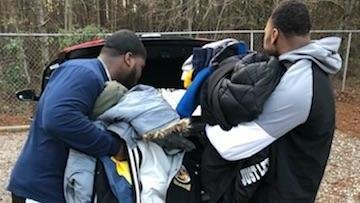 As the 102nd ranked player in the ESPN 300 and a 4-star defensive end, Justin Mascoll is fortunate to have the opportunity to attend Clemson University on a full scholarship, but he knows that there is more to life than just football and sports.

With that in mind, Mascoll, his teammates, and coaches led a coat drive that raised over $1,600 of coats and jackets for the Family Promise of Gwinnett County and the residents of South Gwinnett.

With temperatures dipping into the teens and 20s across much of Georgia, Mascoll – the Clemson signee – and his teammates saw a need amongst their classmates and neighbors and immediately jumped into action.

“It's freezing out here in Georgia, so just seeing those people out there pretty much freezing, it's like, 'Man, they really need this stuff.' I've always been willing to help people and wanted to give back, so it was definitely a good experience,” Mascoll told TigerNet last week.

Mascoll enlisted the help of his high school and together they worked to make a difference in their community.

“We told everybody to donate what they could and the coaches played a big part in giving us their stuff. We put some of our stuff in there too. It was a good turnout. We gave them the Family Promise of Gwinnett County. It's right by my church.”

Mascoll knows that he’s blessed to play the game he loves, but he’s also realized that live extends well beyond the gridiron and anytime he’s able to put a smile on the face of a classmate, neighbor or even a random stranger, he’s going to make the most of that opportunity.

“It's definitely a blessing. It teaches you the value of the most important things in life,” he said. “It's always nice helping people, seeing people smile and putting a smile on people's faces. We're fortunate to be able to put smiles on people's faces and making their day good and keeping them warm. It was definitely a good experience.”

Clemson football and Jeff Davis’ PAW Journey are well known for their works in and around the Clemson community, and Mascoll said he looks forward to the next time he’s able to give back and serve others.

“I'm just always willing help. It's not all about football,” he said. “It's all about helping people and being a servant. I want to help people and stay humble. Some people aren't as fortunate as you are, so that's how I see things. I'll most definitely be looking to do something like this again.”