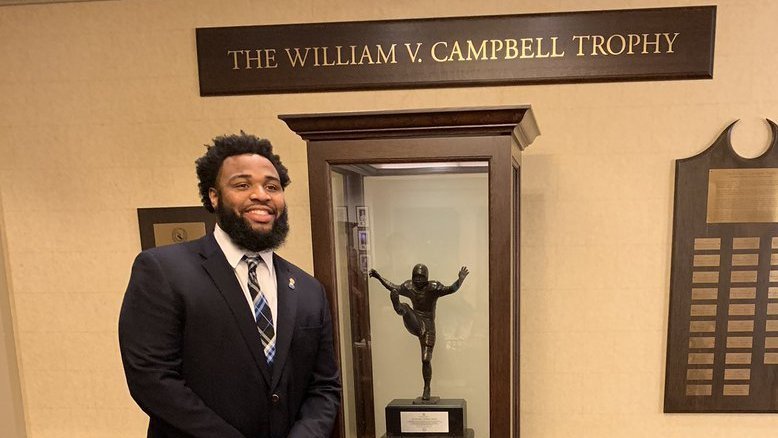 Always be yourself and who you were meant to be. Wise words from Clemson defensive tackle Christian Wilkins, who was awarded the 2018 William V. Campbell Trophy on Tuesday.

The award recognizes an individual as the best in the country for his combined academic success, football performance, and exemplary community leadership. The award, which is prominently displayed at its official home inside the New York Athletic Club, comes with a 24-inch, 25-pound bronze trophy and a $25,000 postgraduate scholarship.

Wilkins was one of the 13 finalists set to receive an $18,000 postgraduate scholarship already as a member of the 60th NFF National Scholar-Athlete Class this year. Finalists were in New York City for the 61st NFF Annual Awards Dinner on Tuesday.

It was the end of Wilkins’ speech that was the most moving, his message to the world.

“I want to leave Y’all with this. This is my message to the world, to a lot of people young and old...No matter where you are in life, always be yourself and be who you were meant to be,” Wilkins said. “Never apologize for who you are and where you come from. Don't be afraid to be yourself. I feel like I am who God has called me to be and I'm not going to apologize for that. I'm going to thrive in it and do it passionately and be the person I'm meant to be. Always love, care and serve others. I feel like that's the most powerful thing you can do is serve somebody.

“Do something for someone who can't do anything for you. I feel like that is the most powerful thing you can do as a person. That puts a smile on people's face and ultimately makes the world a better place. Lastly, whatever your gift is and whatever you're called to do, always let your let shine. Someone has to flip burgers at McDonald's, and someone has to be the President of the United States. Whatever you have to do and whatever it is you're doing, do it with passion and do it with all of your heart and let your light shine.”

The following is a transcript of the rest of Wilkins’ speech, a fitting way to enter our first weekend without Clemson football in a while.

“This is crazy. I don't even know where to start. Please give me a second because I have to collect myself. This is crazy. Wow. I didn't really have anything prepared. In all seriousness, I wasn't expecting to win this award. Just hearing about all of these guys back here - the other 12 men behind me - and all of the things they've been able to do. I was ready to throw my speech away in the trash once I started reading all of their accomplishments and hearing about the things they do. I want to commend these guys and give them a round of applause. It's because of guys like us that we break the misconception of typical athletes just being the jock. We break that barrier, and we show that athletes are more than just jocks. We're people who do things right in the community, who serve others, who just have the total package. I want these guys to have a round of applause as well.

“First, I want to thank the National Football Foundation for putting on this great event. This is a first-class event. Everyone is looking good in their black suits, looking really nice. Me and these guys, we belong on an album cover or something. My name is going to be on the accomplishment, and it's my award but awards like this, you don't win on your own. It takes a lot of people, a lot of people pushing you in the right direction, guiding you and these like that, so there are a lot of people who I want to thank.

"I want to thank the entire educational community at Clemson University from President Clements and his leadership to all of the professors and academic advisors and learning specialists because without those people who pour into young people, the world is doomed and we don't have a great future. I definitely want to thank all of those people. I want to thank the Board of Trustees at Clemson. I've grown close with a lot them as well. I'm honored to accept this award and represent the school in such a great way because at Clemson we take the term student-athlete very seriously. I'm just completely shocked that I won this award and I'm so honored to represent my school in such a positive way and a positive fashion.

“I would also like to thank Coach Swinney. I would like to thank him because I guess I have to (laughing). He's the guy who determines my offensive snaps, too, and I enjoy running the ball, too. I want to thank Coach Swinney for your leadership, always serving your players hearts and not their talents and challenging us and being a positive role model and a positive male figure in my life and the lives of others. You're an upstanding man. I don't know what Mrs. Kath is doing with you. She settled for you. She's a great woman, and you've got a great family, so I definitely want to thank you, Coach Swinney.

“I want to thank Brent Venables, who is my defensive coordinator. He helped recruit me and get me to Clemson. He's a great guy. He's always someone I can lean on, who supports me, who believes in me 100-percent and who challenges me each and every day to be my best on and off the field. I want to thank Coach Todd Bates, defensive line coach at Clemson.

“I also want to thank Coach Jeff Davis, who is also here tonight. He wears many hats. He kind of serves as the pastor, deacon, reverend. He's also like a mentor type coach to so many of my teammates and so many of us players. He started the PAW Journey program. PAW - Passionate About Winning. To me, that means passionate about winning on and off the field. He challenges us to be a person of influence, a person of excellence in everything we do.

“Most importantly, I want to thank my teammates. Anybody who has been around Clemson and had the opportunity to see what Clemson is like, you don't really know what's so special, but the special thing about Clemson is the people and its players. My teammates have made my experience at Clemson one to remember forever. I have guys who push me to be excellent, not just on the football field. They are guys who think like me, who challenge me to serve my community and do well academically. It's not just off the field but on the field as well. I've won a national championship. All of my past and present teammates, I want to thank all of them because I definitely appreciate them a whole lot.

“I also want to thank my family, who are here tonight. My beautiful mother, my brother. I want to thank my family because the odds were against me my whole life. I'm from a broken home - a single mother of eight kids - so this isn's supposed to be me up here. My mom and my other singles helped drive home the value of an education and doing what's right. Ma, you're the real MVP.

“Just to talk about football for a quick second. Football is such a great game. It really brings a lot of people together. I'm giving my speech next to one of the greatest football players ever. Football is a great game because it brings people together from all over the world no matter your upbringing, no matter your circumstance, no matter what you've been through in life. We're all guys from different walks of life and different backgrounds, but through the game of football, we're able to be seen as equals. Where we come from, our upbringing, it doesn't matter because we're all here tonight to be honored and we're all here for the same award. Since football has been so great to me, it's always important for me personally to use my platform to give back and to be a person of influence.

"One of the things I got to do this years was to be a substitute teacher, and I didn't really know what to expect. All of the snot-nosed, boogered kids running around, I felt like Arnold Schwarzenegger in Kindergarten Cop with kids hanging off my leg and all types of crazy stuff. That was a great experience. I thought I was going to go into that serving the kids and serving their hearts and being able to teach them something, but they taught me so much more. I'm definitely grateful for that experience. That's one of the ways that it was good for me to give back and use my platform as a man because I feel like young kids don't get the opportunity to have a positive male influence in their life, so I try to be that for kids, not only as a man but as a black man, that was important for me to do.