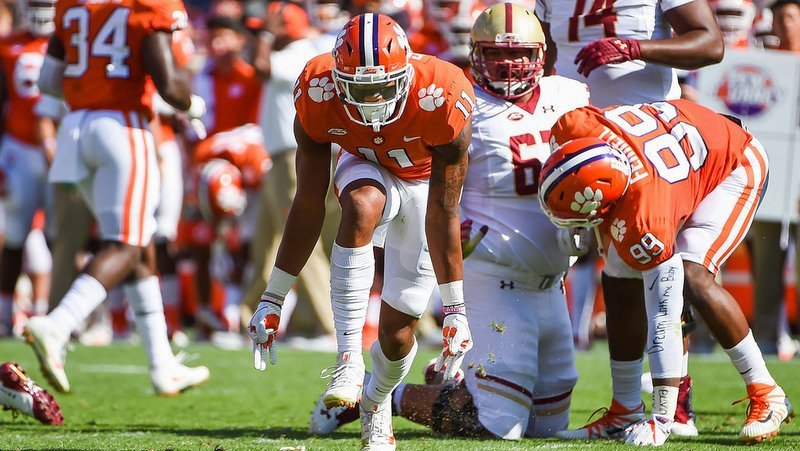 Clemson head football coach Dabo Swinney previewed his team's matchup with Boston College this weekend in Chestnut Hill – with a win the Tigers will clinch the ACC Atlantic Division title and a berth in the ACC Championship Game.

The game is set for an 8 p.m. start and will be shown on ABC with Rece Davis, Kirk Herbstreit, and Maria Taylor providing the play-by-play and color commentary.

"We have the opportunity to lock up the division Saturday night and settle it on the field. It's championship week for us,” Swinney said. “You work all year to get to this point. Now you're four quarters away from achieving one of our main goals. I'm really proud of our team. We have a huge challenge.”

The Eagles are led by quarterback Anthony Brown and running back AJ Dillon.

"Boston College is a tough, hard-nosed, well-coached team that has had a heck of a year. Offensively, it starts up front for them,” Swinney said. “They're big, strong and physical. They know who they are and there is a lot of veteran leadership and experience. Their style is a little different in terms of how they go about things. You'll see a lot of 12 and 13 personnel.

"The quarterback is an outstanding player. Very good player. A.J.Dillon is a 245-pound back. No. 23 (Travis Levy) behind him is a heck of a player. They've all made big plays. No. 89 (tight end Tommy Sweeney) is the best we have seen at his position. He leads them in receptions. They've got a couple of good wideouts. Just a very well-coordinated offense. They do an excellent job.”

The Eagles rank 49th in total defense but have had success against the Tigers in the past.

"Defensively, it's the same Boston College. Our game last year it was 7-7 in the fourth quarter and we were able to get control of the game late,” Swinney said. “Every yard is a tough, dirty yard. They make you earn everything. Very well positioned and coordinated. Big at tackle. Their two ends are very good. They've done a nice job of recruiting especially on their back seven where they have really improved. They're athletic and can cover. One of the better returners we've seen, too.

"This is what championship football is all about. We get an opportunity to get after it Saturday night and see if we can find a way to win."

On his first win at BC ten years ago

"Yes. 10 years ago, almost to the date. Not too far past that. Always special memories. That was an unbelievable moment. Every time I go up there, I think about that. Hopefully, we can celebrate in that locker room one more time."

How to prevent complacency despite big wins

“We just do what we always do. We don't prepare any different. It's the same Monday practice that we had against Georgia Southern. We try to create consistency in our preparation. We don't do anything different as coaches. We just go about our business and put our plan together with a daily routine. Every week we try to make that game the biggest game of the year. We don't get too high. We don't get too low. Fans do, but we don't do that. We stay focused on the task at hand.

"Right now this is the biggest game of the year because we're playing it. This isn't any bigger than last week. Had we not won last week, we wouldn't be getting a trophy if we win this week. But we have to win."

What would it mean to you to win the division again?

“That would be our fourth in a row. I don't know that it's been done. That would be a great accomplishment for these seniors who have accomplished so much already. It's important to them. It would mean we would have a chance to go to Charlotte and play for a fourth ACC title in a row. You can't win 12 until you win 10."