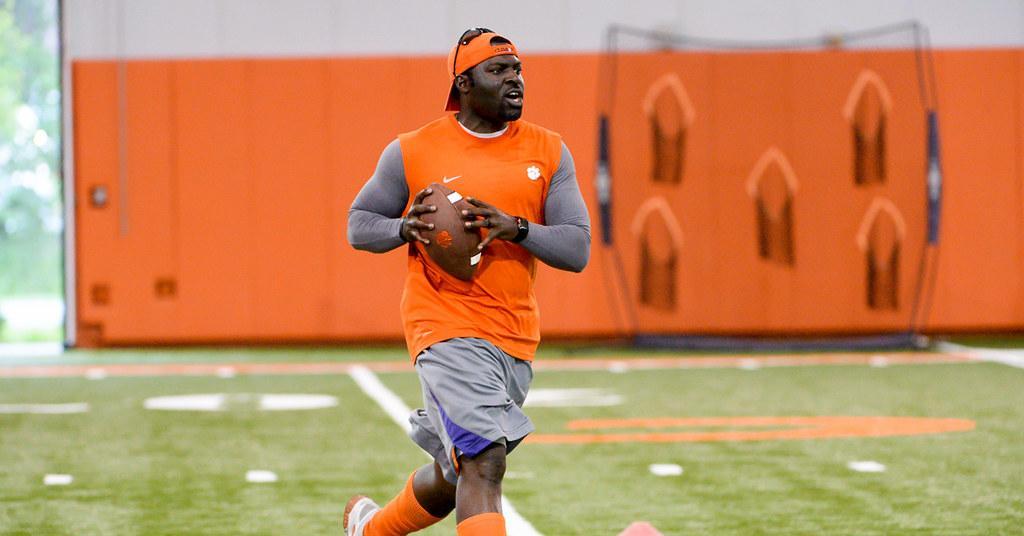 Dantzler is a familiar face around the Clemson football complex

Woody Dantzler is a familiar face around the Clemson football facility, where he acts as an observer, a former player, and a friend. His most important job, however, comes with the words of his dad echoing in his memory.

Be more than a football player.

Dantzler is a mentor to members of the Clemson football team, and he wants to see those young men reach their full potential.

Dantzler was a dynamic playmaker at Orangeburg-Wilkinson High School, pairing up with future Clemson teammate Jackie Robinson to terrorize opposing defenses. In 1999, Dantzler became the starter at Clemson and threw for 1,506 passing yards and nine touchdowns. He also rushed for 588 yards and four more touchdowns.

In 2000, Dantzler and the Tigers finished 9-3, as he passed for 1,691 yards and 10 touchdowns while rushing for 947 yards and 13 touchdowns. In 2001 as a senior, Dantzler became the first quarterback in NCAA history to throw for at least 2,000 yards and rush for another 1,000 yards. He was 188 for 311 (60.5 percent) passing for 2,360 yards and 17 touchdowns. He added 1,004 rushing yards and another 10 touchdowns. With the stellar season, he was considered a candidate for the Heisman Trophy, which is given to the top player in college football each year.

Dantzler graduated from Clemson with a degree in marketing. In 2007, he was inducted into the Clemson Football Hall of Fame, having finished his career with 53 Clemson football records. He later spent time in the NFL with the Dallas Cowboys and Atlanta Falcons.

What’s he doing these days?

Dantzler and his wife live in the Greenville area and they have two daughters. In addition to being a family man, he is a pharmaceutical sales rep that covers the much of the Upstate, including the Clemson/Seneca area, which allows him the opportunity to be close to campus on a weekly basis.

In addition to that job, Dantzler is a motivational speaker and mentor, and also works Clemson University President James Clements and his staff on some initiatives that will positively affect Clemson as a whole with a focus on faculty and students.

Dantzler said he loves being able to make an impact on the lives of young men.

“I stay pretty close with the team and the staff, and I have a few guys that I help out with and I mentor, talk to, and help out and be that vibe from the past to the present,” Dantzler said. “I want to stay close to Coach Swinney and his staff and be available to them, and stay close to Jeff Davis and what he's got going with the PAW Journey as far as developing those young men into men. That is one of my callings, I want to see young men reach their full potential and make them realize that football is just a small part of it and not their whole story, just a part of it.

“It puts into perspective what my dad said to me before I came to Clemson. He said to me, right when I was getting ready to leave, he said to me, "Don't you go up there and be just a football player." A lot of these guys recognize that. Yes, they enjoy being a football player, but they want to be known as the person themselves and not just a number or a name on the back of the jersey. These guys want to be known as individuals and that is what the PAW Journey does. It shows them that they are more than just football, they are fine human beings created with a great purpose and their impact on this world won't be about how many people they made happy on Saturday on Sunday.”

Another lesson taught by his dad is that each generation sets up the next generation to go further, and he sees that working as a positive in the Clemson program.

“I say sometimes that there is a generational gap in society that needs to be addressed, but when Coach Swinney came to Clemson he really addressed that generational gap. He made sure that if you played at Clemson then you are coming back because he understands the concept of legacy and the concept of generations building upon generations. I think that is really what shifted Clemson into the next phase of the program.”

*NOTE: To contact Dantzler about his motivational speaking, email him at info@dantzleriii.com. Our interview was longer than this, and he has great insight into the play of Trevor Lawrence (his favorite play was the throw to Tee Higgins in the back of the end zone against Alabama), and I hope to make him a regular contributor during football season.