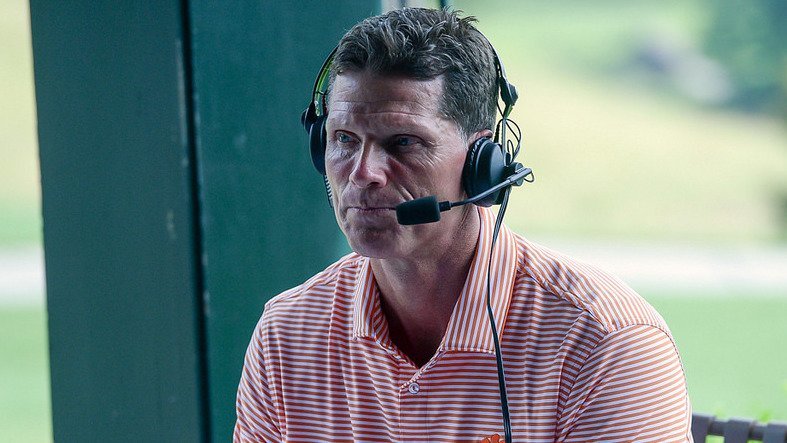 Clemson’s defensive coordinator told TigerNet last week that he is excited about having his son Jake, a freshman linebacker, with him this season in all of the football activities. Venables said that having Jake nearby is the best of both worlds, and he got his first taste of it when Jake moved on campus last month.

“It was cool. It was really cool. It was a blessing. I don’t take that for granted,” Venables told TigerNet. “I actually talked to a number of dads of players who were here this summer and the dads of recruits, and I told them, ‘I am luckier than you are.’ Because when you’re a dad and you have a child and they go to their first high school practice and they come in and you ask them what happened and they don’t want to tell you. You want details, man! You want the juice!

“Did you rep with the first team? Did you guys do the Oklahoma drill? Did you do some 1-on-1’s? How’d you do? What did the coach say? What position were you in the line? Just all the little things. Did you play hard? You want to be that fly on the wall, but you can’t. But I can. And I value that a great deal and don’t take it for granted. I am really excited for that opportunity.”

While Venables is excited to see how his son performs on the field, it’s what Clemson can do for Jake off the field that has him excited. His statement about those opportunities is a recruiting pitch that can’t be denied.

“As I told Jake when he decided that Clemson was where he wanted to be, I was more excited for him inside thinking about all of the positive influences that are going to touch his life, day-to-day, more so than he has ever been exposed to,” Venables said. “Whether it’s on campus or our dining facility or our weight room, the academic learning center, there are so many people of character that will touch his life that you run out of fingers and toes to count them all. They are people of character integrity and people that think big and are positive people that are going to influence his life. He thinks it is about rubbing that rock and running down the hill and lighting somebody up and I am looking at the big picture.

“He has all of these opportunities to grow as an athlete and as a person and find his way in life. I think the football stuff, to me, is easy. He is a very disciplined and structured and not all of the kids are that way. Some like to compete but no work. They don't always go to bed at 10 and get up at 5:30 and drive themselves and get dressed and make decisions. They are not all that way and Jake is. I am proud of him for that. The football things are easy but it's the other things I am excited about.”

Past seasons have been fun, but 2018 will be something special.

“Just having my son is going to be really neat. A special opportunity for us. He knows when we go to that football facility that I am the coach and he is player No. 15,” Venables said. “But I love all my guys and I coach them hard. I have high expectations and I have high standards that they have to meet. We are going to do things a certain way, and I think any successful coach or player does things in a structured and disciplined way. So we are no different that way. I like to have fun with my guys and I love watching them compete and I love watching them have success and having fulfillment and feeling worth. It will different. It's always been good but this will be even better, having him right there as a part of it.”