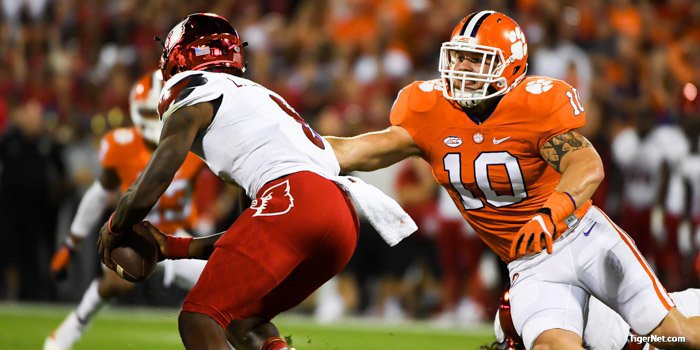 Clemson's defense made the plays when it counted Saturday night

CLEMSON – Bettors all over the country put their money on Louisville. Saturday night they lost.

The bookies and bettors underestimated Death Valley, Brent Venables and the Tigers’ defense as No. 5 Clemson upset No. 3 Louisville 42-36 Saturday night in Memorial Stadium.

While Clemson’s defensive coordinator wasn’t thrilled with the way he coached, he couldn’t be happier with the way his defense performed down the stretch in sealing the victory despite giving up 568 total yards.

“Five hundred yards sucked, alright. I thought the first half, we really felt good about where we were at,” Venables said after the game. “We were pretty consistent, and we had things pretty well contained, and the second half it was tough to get into a rhythm. We couldn't help the guys, and we did a bad job in the second half. Those last couple of drives, we got a three-and-out and had an incredibly gutsy performance on that last drive and ol' Marcus Edmond makes a great play there on the little zone blitz. I'm really proud of our guys. They played their hearts out, and they fought for that win. They deserved that win. I'm thankful because I just didn't feel like I helped enough that second half.”

As Lamar Jackson and Louisville were stopped a yard short of the first down marker on fourth down, Venables wasn’t feeling warm and fuzzy. As a matter of fact, he was just happy he didn’t “screw it up.” 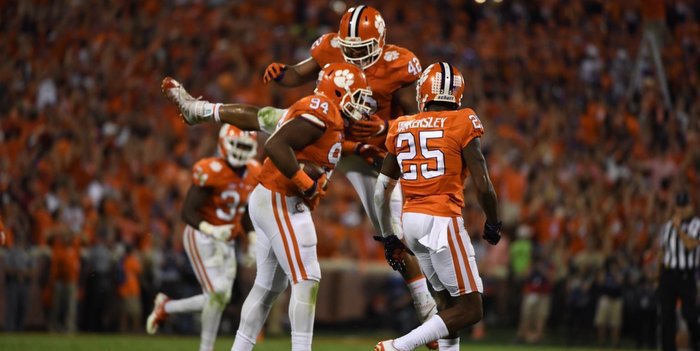 Clemson's defense made the plays when it counted Saturday night "

“I can't help myself. I only think about how I almost screwed it up in the second half. But I'm amazed at our guys and how they never give up,” Venables said. “It's pretty humbling to watch that. Sometimes you just kind of seize the momentum. Our backs were against the wall, and they answered the bell. We played more like we did in the first half. It was attitude and belief as much as it is anything. You don't ever make apologies for winning or being successful. We aren't chopped liver. We have talented players, and we are tough.”

Jackson was 27-of-44 for 295 yards, a touchdown, and an interception and added 162 yards and two scores on 31 carries, but Venables said he felt like Louisville’s quarterback had to work for everything he got.

“We were on fumes, for lack of a better word. You'd like to play more guys, but the situation maybe didn't present itself, and we didn't do a very good job coaching in the second half, and our guys overcame the lack of coaching,” he said. “We had some stinky tackling there, but he's so strong and explosive. That was a big part of it too where we 'made him earn it' so to speak. I hated every minute of it, myself. It was agonizing. I do think for the most part we contained him that way. The bend and don't break wasn't the plan per say, but we made enough stops and held them to field goals and got off the field on some downs and got the three-and-out late. When we weren't playing very well, at least they didn't shut the door on us, which they could have.”

While Clemson’s defense held Jackson and the high-powered Louisville offense in check for the first half and made plays down the stretch, Venables said he might need oxygen after facing the sophomore signal caller.

“He's a great player. He runs through trash. He's so strong. He can get vertical. We had a lot of opportunities to make plays on their side of the line of scrimmage, and he wiggled out of them,” Venables said of Jackson. “It's easy to say we could have had three or four more sacks, but he's a very dynamic player with good players around him. He is the real deal. I was pretty dizzy holding my breath. I held it a lot. I needed oxygen. He is pretty scary. Pretty frightening.”

The Cardinals ran 99 plays and Venables said he doesn’t want to think about any of them ever again. However, when it counted most, the defense and Death Valley rose to the occasion.

“It (pre-snap penalties) happens both ways. That's part of playing in Death Valley,” Venables said. “The bookies got that one wrong. Death Valley will do that to a lot of teams. It's been a while since an offense has run that many plays. They all stunk. We couldn't get into a rhythm and the turnovers we were right back on the field. We (offense and defense) didn't complement each other well in the second half until very late. When it counted, we did, and that's the mark of a good team and high character and tough guys and if we're something we're tough.”