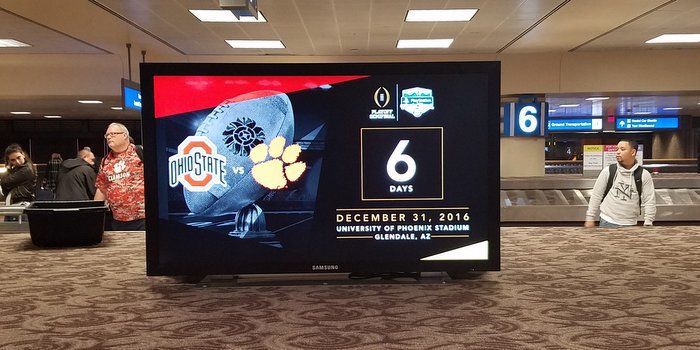 The carousel at the Phoenix airport is ready for the game

SOMEWHERE IN THE AIR OVER TEXAS – We loaded up the car early on Christmas afternoon and drove to Atlanta so we could catch a flight to Phoenix for Clemson’s playoff tilt against Ohio St. The Fiesta Bowl will be my tenth consecutive bowl game covering the Tigers for TigerNet, and as we were driving to Atlanta a flood of memories came pouring out.

I covered a few Clemson bowl games for the paper back in the day, but I had also covered Furman and Wofford in the I-AA Playoffs and other playoff and bowl games over the years. It wasn’t until I started working with TigerNet, however, that I realized that working the postseason could actually be fun.

The bosses here at TigerNet allowed me to cover the Gator Bowl against Nebraska, and I traveled in the morning before the game (being able to stay longer at a bowl site would come later). We arrived at the media hotel (the nice Hilton on the waterfront), where we had a reservation going back over three weeks. However, the Hilton was also the Nebraska team hotel, and we were fighting a throng of Nebraska fans who would be able to pay more than the media rate for a room, and we were taken aside and told that we would be put up at a “comparable property” for one night and that we could check back into the Hilton after the game was over.

The hotel called us a cab, which was driven by a guy that reminded me of the Ghost of Christmas Past from the movie Scrooged. We were taken to a hotel on the other side of the river and shown to a room with outside doors, open sockets in the walls and missing panels in the ceilings. The final straw came when a roach crawled out of one of the open sockets, my then-wife screamed and another fell on her head out of the ceiling. I took pics, and Hilton comped us three free nights in the hotel after the game was over, and despite the roach bugs and the loss I thoroughly enjoyed the trip. The highlight for me was seeing Larry the Cable Guy in the press box and getting a “Git er done” from him.

The next season I managed to get into Nashville two days before the game, and had a blast getting my first true experience with the early interviews and hanging around the city an extra day after the win over Kentucky.

The year after, I promised Nikki (it was her first bowl trip) that she would have a blast, considering the bowl game the year before had a media suite with refreshments and free stuff for the media. Clemson wound up in the Belk Bowl in Charlotte, and even though the bowl didn’t have any type of media suite we were there for five days and got to hang out with the team at Lowe’s Motor Speedway. The biggest difference between those days and now? We did the pre-bowl press conference with the coaches in a very small pizzeria in downtown Charlotte. We interviewed Skip Holtz and Dabo Swinney as customers wandered in and out, wondering who the two guys in suits were with microphones in their faces.

The lowlight of that bowl game – other than the loss – concerned the media gift. The media loves a gift, and we were told we would receive the gift at the stadium. We got to the stadium, and we were told the gifts would be handed out as soon as the game ended. Of course, the brilliant mind that concocted that plan didn’t take into consideration that media members have to do things like interviews, write stories and recaps as soon as the game ended. We all left the press box empty handed and watche as our media gifts left in the hands of the events staff people that worked the parking lots and elevators. You win some and lose some.

Things made a dramatic turn for the better the next season. The Tigers played in the Orange Bowl, and because Swinney took the team down about eight or nine days early, we went down that early and met the team’s plane at the airport. Because it was a BCS bowl, we were treated like kings, from a media party that featured “gambling” for prizes to a media room open every night with large screen televisions, endless food and an open bar. We were in heaven. I knew at that point that a Belk Bowl or Music City Bowl would never be enough, at least not from a spoiled media standpoint.

The Chick-fil-A Bowl against LSU was more of the same – we stayed in the Marquis in downtown Atlanta, were treated to box seats at a Falcons game, had another media room open most of the night with free everything and we were there multiple days. Heck, I was getting used to the high life.

Then came the Russell Athletic Bowl, and we had to leave South Carolina wo days before Christmas. The media hotel was a dump, and I tore all of the ligaments in my knee the day before the game trying to get equipment to and from the car. I struggled through the game, but hoped beyond hope Orlando wouldn’t be the destination anytime soon.

And then last year happened. We wound up back in Miami for the Orange Bowl, and we were once again treated like royalty. Just when I thought it couldn’t get any better from a media standpoint, it did. The Tigers beat Oklahoma to advance to the title game, we booked tickets midway through the fourth quarter of that game and wound up getting to Phoenix the day before the team.

The media hotel was the Marriott Camelback Inn, and Nikki and I had our own adobe room, complete with a sun porch and lounge chairs overlooking Camelback Mountain. The food in the media room was off the charts good – every meal – and every interview was handled right on the resort’s premises. We would walk out of room, through the flowers and the cactus, to whatever meal or media event was taking place. Heck, we even got a police escort to and from the stadium.

So, now we are headed back to Phoenix and those fabulous digs, and it’s my hope that we not only provide you with the news of the day, I can also blog a little bit and let you know about the trip, the events and let you see what a bowl trip looks like through our eyes.

It’s bowl season again, and it’s a far cry from the cockroaches of the Gator Bowl and the ineptness of the Belk Bowl. Let the fun begin.