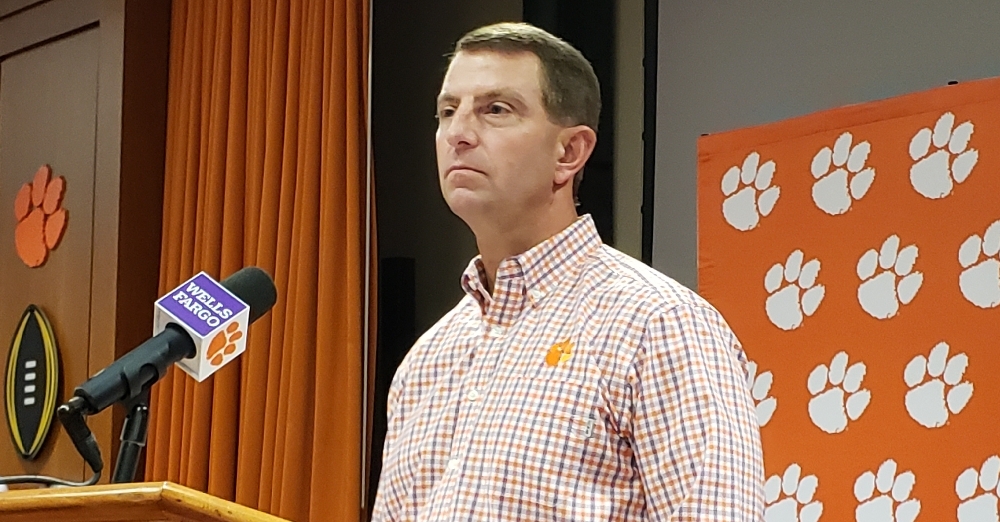 CLEMSON – Clemson head coach Dabo Swinney is excited about the chance to spend a little time in Death Valley.

Swinney says the day will be bittersweet.

"I love home games. There's nothing better to me than being in the season and being with the team. There's nothing like Tiger Walk and game day in Death Valley,” Swinney said during his Tuesday press conference. “It's sad because we're near the end of our season. It's the last time we will see some great players run down The Hill. It's a special, special week.

“Wake Forest is a tough team. They've had a heck of a season. They're 7-2. They're coming off a tough loss at Virginia Tech. I've been looking at them for a month because we have had a lot of common opponents. They're very impressive. They're unbelievably well-coached. That would be an understatement. They do an awesome job with their scheme. Defensively, they are disciplined. They cover well. They're an under-front. They do a good job disguising. They will pressure you some. They will pick their spots. They're impressive up front. No. 9 coming off the edge is a heck of a defensive end. They're 290-ish inside. They're never in one place. They are always moving. They do a great job in the secondary. They have created a lot of turnovers. We are +9 and they are +7. They have won some close games. They get their hands on balls.”

“Offensively everything starts with this quarterback. He is a pro. No doubt about it,” Swinney said. “He's big, physical, athletic and can make all the throws. He's got some great wideouts, probably the best group of receivers we have played. They're big-bodied guys, great on-the-ball guys. They have great length. No. 2 is the most elusive. He creates separation. He is a really good player. They have a really good group and they're kind of similar to us. They have a really good offensive line. They have a scheme they believe in. They have some backs that just pound you. If you don't tackle with physicality, two-yard runs become six-yard runs with this group. And they play all three of them. This will be a big challenge for us. I've had this one in my mind for a while. We want to send our seniors out with a win. We want to continue to build momentum for our postseason."

A win would be 26 straight for the Tigers.

"It would be awesome. It seems like it's a new record every week,” Swinney said. “We got to 10-0 last week and got another division title. The seniors have a chance to get a 52nd win this weekend. To get a 22nd straight home win, which would be a school record, would be awesome. This bunch on defense, it's 13 games they have given up 20 points or less, which goes back to 1958 under Frank Howard. It's amazing. These guys take pride in what they're doing.”