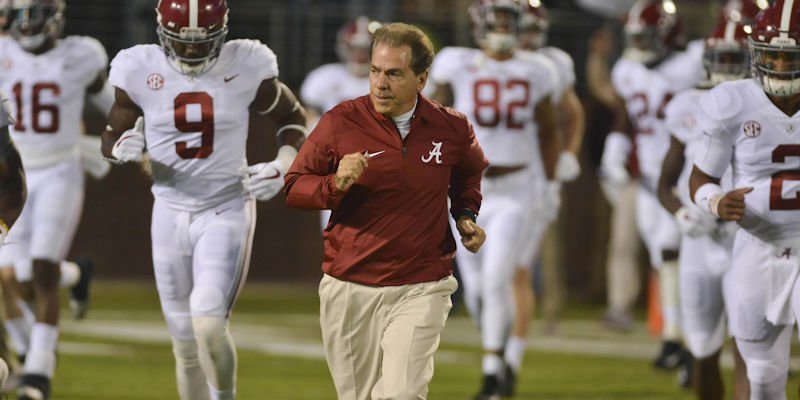 NEW ORLEANS, LA – Alabama has arrived in New Orleans and is preparing for a “difficult” College Football Playoff seminal against top-ranked Clemson.

“I think when you get an opportunity like this, which is a special opportunity to play a team like Clemson or any team that is in the playoffs at this point it means something,” Saban said. “The players obviously have to expect it to be a very difficult game as almost all these games are like a dogfight so you have to be able to overcome adversity and everybody has to take ownership to do their job. It comes down to what do you want to accomplish and what you are willing to do to do make it happen.

Saban said he was pleased with the way his team handled bowl preparation in Tuscaloosa.

“To this point relative to the preparation, we've had I've been really pleased with the coaches and the players and how they are going about that,” he said. “So hopefully we'll get started down here and be able to pick up where we left off and get ourselves ready to play an outstanding game against an outstanding team.”

Alabama lost to Clemson in last year’s title game, and he said his team failed to finish.

“Well I think that you know one of the statements that I made last year after we didn't succeed in the championship game is don't waste the feeling,” Saban said. “Which means learn from the things that you did or didn't do and I didn't think we finished very well. We didn't finish very well in the game, we lost the game at the end of the game, and I think your identity as a team starts with how you finish. And this team has an opportunity to try to finish this season a little better than what we did the last. I'm proud of the way they went through the season. I think we lost our identity a little bit in the last game, maybe forgot who we were and what we needed to do to be able to succeed in our last game. We feel fortunate to have the opportunity to sort of rectify that in the playoffs.”

The Tide come into the game relatively healthy.

“We don't have any suspensions but I think everybody's aware of the injuries that we do have. Dylan Moses was injured in practice, the third practice that we had and he won't be able to participate in this game,” he said. “Hootie Jones, we lost in the Auburn game. So those two guys are definitely out. Shaun Dion Hamilton is out. But we do have Mack Wilson, and a couple outside linebackers, Christian Miller and Terrell Lewis, that have been able to practice and come back and play. We've had a significant number of injuries on defense, some are back and we've lost some other guys.”